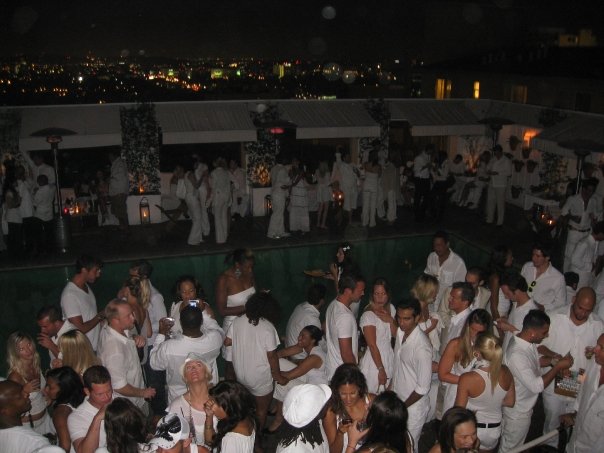 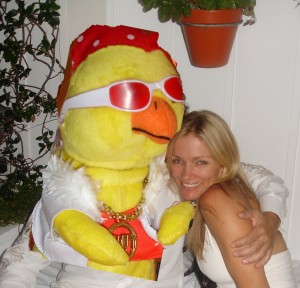 “Hollywood” events were not what they were cracked up to be last week my friends. Especially amid the turmoil happening just to the east of us Westsiders that is burning through untold acres of countryside, homes and businesses.  It’s tough to put your heart into the frivolity when that crazy stuff’s going on and you can see the flames and the mushroom cloud of smoke from several spots in Los Angeles. 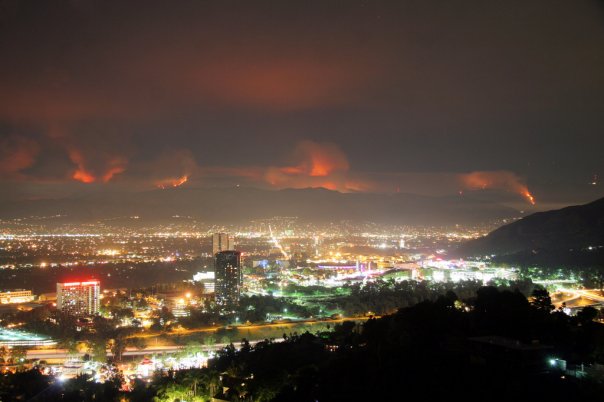 This was taken from Mulholland Drive by a guy named Stephen Parisi, who posted it on Facebook sometime last week.

But last weekend’s events weren’t without their fair share of, shall I say, “interesting” incidences. Oh sure, it was awesome to participate with my client in the red carpet arrivals, and such.  I just don’t think there was the kind of PIZZAZ or glamour you’ve become accustomed to, to report or dish on it too much.  But I’ll try.

Thursday night, prior to the Daytime Emmys festivities, I attended a Public Relations Society of America – Los Angeles Chapter mixer.  Nothing glamorous there.  Sounds just like a regular old mixer right? Well, it was.

But I’d had higher hopes for the event.  I think I had in my mind I would attend, meet a few people, and then see them at the walk-through of the theater or on the red carpet.

What in the world got into me!?  Did I REALLY think that on the eve of one of their busiest weekends, publicists for daytime television and its stars – from all across LA-LA-Land – would suddenly break away from the pandamonium to attend a PR Society networking event?  I shoulda known better.  No kiddos.  I am the only *##*)*&  moron out there “optimistsically insane” enough to think I can manipulate time, stuff my schedule so much it looks like I’ve injected it with steroids, and still smile and make nicey-nice in the process.

Now, had it been a Daytime EMMYS publicist mixer, you bet your sweet daisy every publicist from across the UNITED STATES would have come scratching, kicking and screaming to get in.

That’s how the weekend started.  Interesting.  But the rest, along with a few highlights, went as follows:

Friday:  Publicist and Press Walk-Through at the Orpheum Theatre.

The highlight here was meeting the people – the publicity team – who were responsible for securing my credential for red carpet, as well as a very cool gal who’s the director of publicity for CBS.

Saturday: After dinner get-together with my client and friends at the bar atop the Standard Hotel, in downtown L.A.

The best part here was hanging with our friends Ricky and Lucy, and that the bar was chock-full-a-hotties – great people watching – and we (my guy, M.C. Nugget and I) met a prominent casting director, which we were both glad about! The sobering part:  We could see the FLAMES from the L.A. fires, as clear as if  they were close enough to jump the highway and burn through downtown!

Lots of little tid-bits here:  1) I ran into two people (a stage manager and a talent manager) that I use to work with at MTV, VH-1 and more… Fun stuff!  2) I got to see who the new hotties of daytime tv are – male and female… and wow – they make em young these days! Ha!  3) I saw Susan Lucci up close – and yes, she is just as fabulous and fit and gorgeous in person – probably moreso – as she seems on television.  4) It was 6000 degress, so I dripped my way through media interviews.  5) I was able to get my client interviewed by a few of the outlets.  6) A harsh reality in this biz: because my client was not a presenter on the show, nor was he nominated, it was tough to get the already bogged down press to pay attention to him.  I’m sure it was largely in part to the fact it was one of the most bottlenecked, over-crowded, slow moving red carpets I have EVER worked! As a result, only one of his interviews aired online, and only a couple of the still photos showed up. But hey – it’s there in cyberspace now.  There’s no disputing that!

I know you want to hear more.  You’d like to hear about my glamorous hair and makeup, what designer I wore, yada yada.  Right?  Well, I wore a khaki business skirt that was right above my knees, a red tank top and red heels. My hair was done by MOI (that’s ME in french), and so was my makeup, which consisted of face powder, a bit of eye shadow – I think – and mascara.

Sorry!  I know you expected SO much more!

But it was an eventful weekend, nonetheless.  Definitely replete with Hollywood Hobnobbing.

But this weekend it’s LABOR DAY!  YAY!  Next week we can all actually get some work done.  HA!

Speaking of next week, tune in for my dish on the White Party at Sky Bar  -M.C. and I are attending this Sunday night!

Have a beautifully warm and breezy weekend everyone!