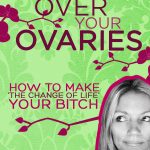 When Lisa Jey Davis went “sans ovaries” for medical reasons at the young age of 46, she was shocked (to say the least) to learn of the changes her body would undergo as a result. The fact she would need to replenish her body’s hormones was the extent of the information dolled out by her docs. She had no idea her decision meant menopause or that her body would think she was entering old age, what it meant for her lifestyle or her emotions (and the well being of anyone around her). She certainly never dreamed she’d be in danger of becoming a card-carrying member of the Red Hat Society or worse yet, the Pill Box Clan. She found herself asking “Why didn’t anyone ever tell me about this?”

Though she was too young to undergo this “Change of Life” and it occurred as a result of surgery… and though the sex education in parochial school, her parents and others in her life hadn’t warned her of the coming bodily changes that could (and do) make grown men cry, she wasn’t about to let that slow her down.

After looking in the mirror one too many times and seeing more fine lines than usual, changes to her hair and a ‘monthly bloat’ that wouldn’t go away, it was time to make this thing otherwise known as menopause herBITCH and live to tell (and write) about it.

What she ended up with was a highly entertaining and inspiring journey of discovery, some hilarious observations and a gaggle of tips to share with every woman in every city. Whether entering menopause, or simply trying to survive someone who is, “Getting Over Your Ovaries – How to Make ‘The Change of Life’ Your Bitch” will serve up the laughs as well as a good basic education about the cycles of life… how to LIVE despite them all.