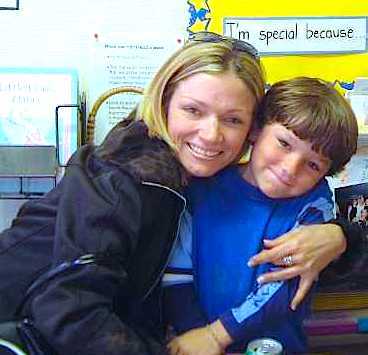 I’ve said this before… that my other boyfriend has 27 inches. It’s true. M.C. Nugget is TOTALLY in over his head… . And it’s not just because of the size. I become entranced when I’m with my other guy. I only have eyes for him. Everyone around me just disappears. And all things considered, Nuggie is actually pretty great with all this, even though I don’t even know if he’s in the same room when I’m with my 27 inch-er…

I guess you could say Nuggie and I have an “open relationship” when it comes to this.

If you’re new, I’m sorry. You think I’m a total sleaze. Well… Pfff! I probably am… but don’t get your g-string in a bunch (if that’s even possible). The other boyfriend I’m talking about is my Big Screen (otherwise known as my 27″ iMac computer).

I’m about to go around the block to get next door with a little story here, but if you want the short version, scroll down past the TOTALLY interesting story just below.. you won’t miss a THING. Swear.To.God.

I’ve always had a love affair with technology, dating back to listening to my transistor radio by the neighborhood pool when I was six. And  I’m pretty good at all things “techno.” Have you seen my “Techno-Babe Moments” videos? When I first married my ex-husband, I was 23. He took me to his family’s cabin in the woods (and by cabin, I mean a luxury home with a full-sized washer, dryer, two bathrooms, satellite TV and telephone service inside). Though it had all the luxuries of home, the place was secluded in a breathtaking mountain valley known as Pearl Lakes, CO, Upon arrival I learned their satellite TV was broken. It was an old-fashioned satellite, straight out of the 80’s… A giant dish sat outside their living room window, and it required dish owners to “subscribe” to various services that had satellites floating up in space. Many of them were free, some were not. They had names like Galaxy19, Telstar and so on. My ex’s family hadn’t been able to watch TV since just after the guy installed it and someone in the family tried to change the position of the satellite to watch something. All they saw was snow. So, my first day there, against warnings that I would light the thing on fire by the end of the day, I sat, undeterred, communing with the piece of equipment. I had it working within about an hour and I’d never used one of those things in my life.

So, the other day, I was thinking about my son Graden, when he was about six or seven and we lived in our condo in Los Angeles. He was (and still is) brilliant and resourceful, and he quickly found ways to reach me through the deep, magnetic pull of my computer screen (though back then it was probably only about 12 inches). Poor kid was forced to be resourceful if he wanted to eat (it was all a part my plan to train him for the apocalypse).

One of the first ways he did this went something like this:

I immediately heard him, snapped out of it, felt guilty and ran to his side.

This reaction greatly pleased Graden. The heavens opened up and the angels did sing on that day.

But that was IT. My life of peaceful communion with my computer was over. Graden started getting creative with things like yelling, or singing made up songs with my name in it, even grabbing my sleeve with his construction clamp-y toy.

This did not bode well for either of us.

Pull me away from “work” accidentally? Okay. But start devising ways to pull me away from my work to say “hi,” “what are you doing?” or any other random statement… uh… NO.

At the same time, I’m not a horrible person.

I actually understood my little guy’s need for mommy time and attention, even if I was working (yes… yes… I actually did work from home then).

So, we came up with a system.

I sat down with him on his bed, snuggled him, looked him sweetly and deeply in the eyes and explained that mommies need to have other people and things in their lives too. That my computer was a way for me to provide a roof over his head. That if he continued to interrupt in such a way, we would be sleeping on the street in a cardboard box very soon, and did he want that to happen? No, of course he didn’t. I also let him know that he had no reason to be jealous… just because the computer obeyed me every single time and made my life easier, it wasn’t his fault… and he had no reason to feel threatened, or afraid. It really was HIM that I loved.

So, I pulled out a white sheet of paper, and I told him that if he ever REALLY NEEDED to pull me away from my work… from my ability to keep us from living on the street, he could QUIETLY slip that baby in front of the computer screen.

I further educated him on situations when this interruption was appropriate:

an accident involving my vodka

This actually worked pretty well. Poor little Graden. He still does this to this day.

But when I remembered this the other day, I immediately texted him. These are fond memories for me. So our text went something like this: 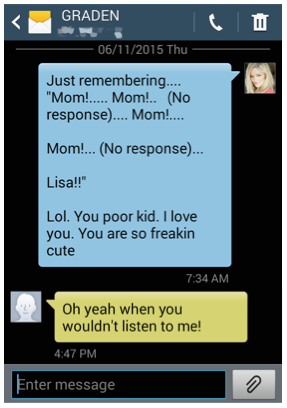 Kids say the damnedest things, don’t they?! You see?? I’m not such a horrible mom. Look how long it took HIM to respond!!!!

I know, I know. The cliche’s don’t escape me (they never do): The apple doesn’t fall far from the tree, You reap what you sow, etc. etc. etc.

Until next time, people!