We interrupt our regularly scheduled blogging to bring you a HOT mom picture.  Yes, we (and by we, of course, I mean me.  Here in Ms. Cheeviousland, I am pretty much royalty, so I’ve adapted the third person “royals” speaking style. Just an FYI.) were going about our daily blog business, writing about the state of the economy, and how it does or does not affect us, when we were just a bit distracted by some hot mommy pics.  This is what we aspire to people! 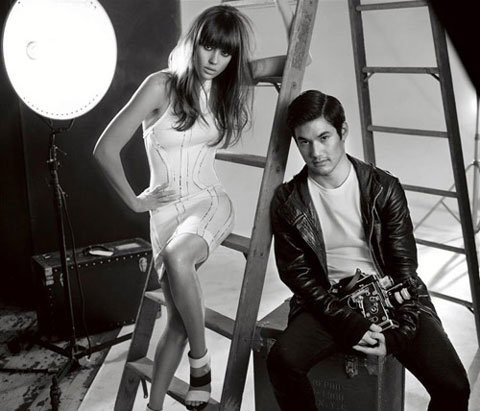 There were tons of shots.  This one (above) was our favorite.  You can peruse more here.

Anyhoo.  Just thought we’d send you a “hump-day” inspiration.  If you are as hot or hotter than Ms. Alba, well, yay for you!  But if you are like most, and still only strive to be in shape and personally sexy, then this should inspire you to get your bloody arse in shape now, shouldn’t it!?  Get on it people.  God knows we’ve been working our “arse” off five days a week… pilates, yoga, stair climbing, weight training, SPX Fitness, you name it!  Then again, we can’t complain.  We DID, after all, make it past the first cut of the Lingerie Football League tryouts for the Los Angeles Temptation, did we not?  We wrote about it (and posted a video of the tryouts) in the post “Lingerie… Football, That Is.”

Okay – enough of the “we”  crap!  Really girls… I post hot photos like this, not only for the cheap thrills and excitement you or your significant “other” can derive from them (or perhaps you AND that person), but also because of the sheer reality, that WOMEN WATCH OTHER WOMEN.  Why?  Because a) we appreciate beauty and hotness, and b) we WANT to BE that pinnacle of beauty and hotness.

Whether you agree that Jessica Alba is HOT or not, you will agree that she has a fantastic body, right?

So here I am again, preaching to the choir, I’m sure, but GET ON IT LADIES!!  (And to my male readers: please just appreciate what I’m doing here).  I’ve said it before, but if you really truly want something (like a hot body) you’re the only one who can really MAKE it happen.  Get to it.  Then report back.

After a significant analysis of the inputs given, the results (though, unscientific as they may be) of the 2008 Ms. Cheevious Hot or Not List are in!

7. Cindy McCain (one point away from Angelina!)

9. Jessica Alba (one point away from Ali McGraw)!

A few who were suggested for the original list:

And of course…. You:

Not to be redundant – but that’s just “so hot.”

So – who do you suggest?  Who did I forget?  PLEASE DO TELL

Stay tuned for more fun and my own rendition of GIRLFRIENDS GONE WILD next week!

—————-
Register to receive these posts by email by Clicking Here

Okay.  I just hate those lists. You know them – the Hot or Not, Who’s Who, Most Likely to Succeed, or whatever-you-can-think-of lists?  In my opinion, they’re shallow, inhumane approaches to valuating people, based on lame sets of criteria, impossible to understand, follow or measure.  Don’t you think?  Well at least we all talk about how shallow and unscrupulous these types of lists are…  just as we read them, cast our votes, make our own judgements, and tune in to our favorite tv show or results episode to see if we were “right.”  I admit it.  I’m guilty as charged.  Though, I can’t say I’ve ever actually visited or voted at one of those Hot or Not websites. I am one of the most opinionated people I know, however.  Just ask anyone who watches television with me.  It doesn’t go without comments out-loud, like “Yeah, right.  Like anybody would really do that!” or “BAD hair day!” or any other wisecrack you can think of.  And I have tuned in to see and voted for the next American Idol on more than one occasion.

I’m sure there are pure, more serious-minded creatures out there who don’t even waste a glance at silly little trivialities such as these. But we’re not here for them, now are we?

But this last week, this whole thing came to mind, because my boyfriend has a gal-pal who’s a chef.  He’s trying to get her to open a hip-cool night time spot in Moab.  He said, “You know, she should have really hot waitresses like they do at Cantina in Aspen.  Her place should have that.  It should be a cool, hip place to go.”  This only came about because his gal-pal asked if he would help out by waiting tables, to which he whooped a resounding “NO.”  The problem is, I couldn’t picture one single “hot” waitress at the Cantina in Aspen.  Not that they are ugly.  They each have their own attractive factor.  So, it actually made me proud of my boyfriend.  He saw their hotness beyond what the media says is “hot.”

So, in the spirit of true shallow, degenerate, perverted, yet fun-spirited behavior, I’ve compiled a very unique HOT OR NOT list.  This one contains just a few women that strike me as – well, something – one way or the other.  I think they are “hot or not” ha ha.  But this is a REAL WOMAN’S LIST.  I’ve got a good mix of sexy, beautiful, smart, powerful, you name it.

On a side note: this list also came about while reading USA Today this week, and observing some of the wicked-harsh comments made about Cindy McCain’s looks.  I raised an eyebrow at the comments some in the media have made, which sounded so childish and petty.  I am not even necessarily a McCain supporter, but veer more toward someone who did not or could not, in my opinion, make this list. But I provided a link to the article where McCain is listed below.  I just thought it was unfair, so she made the list.  I thought it’d also be interesting to see what the REAL pundits say.

But YOU decide!  Remember, “HOT” can come from many places:  brains, power, balls or moxxy, the hip-factor, or just plain sexy/beautiful.

Copy and paste my list (complete list without photos at the bottom) into your reply and rank them with “1” being the highest.  If I get a lot of replies, then next week, I’ll post your HOT OR NOT list.  If not, I’ll just post them based on what I like!  BUT JUST TO BE CLEAR:  I don’t have these in any specific order.  But, here they are, with photos.  Remember, the list alone is at the bottom for you to cut and paste.

10.  My Mother – Nereide Frances Padalino Sherwood – A mother of 11 children, a Cancer, Stroke, COPD and more-than-one-car-accident survivor, as well as HOT MOM.  I guess you can assume where she may rank on my list!  But REMEMBER: She is EVERY MOTHER.

Here’s your list to copy/paste and arrange in your HOT or NOT order.  #1 is THE HOTTEST:

As for me:  I’m Always Hot Baby!  heh heh.  I’ve just been settling into the relaxing, fun, adventurous life in Moab for a short spell before I move to my new place in LA.  I’ll let you know the progress on those last three pounds when I’ve completed my move and can make heads or tales of what/when/why I’m eating!  ha ha!

Have a fantastic week!  And don’t forget this:  YOU ARE HOT.

Register to receive these posts by email by Clicking Here