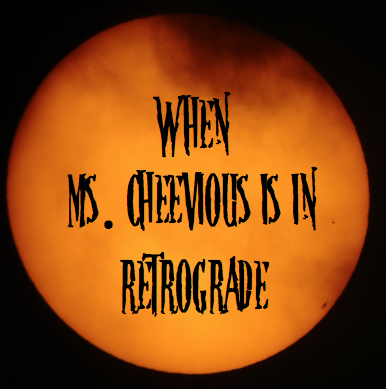 The other day, as M.C. Nugget and I sauntered over to our local watering hole, I relayed a conversation I’d had with Brit (you may remember her from the book “Ms. Cheevious in Hollywood”).

She noticed her emotions were wacky, and attributed it to Mercury being in retrograde. I laughed at this.

SIDE NOTE: I always thought Mercury’s retrograde and the mayhem it causes only pertained to electronics. I wrote about that here. And I blogged once that I wondered whether Venus has its own retrograde, because when women go bat shit crazy, we can’t place the blame on Mercury, willy nilly.

I was wrong. But don’t get too excited. We can’t always  blame Mercury. It’s not in retrograde in perpetuity, for goddsakes.

When Brit cried retrograde foul-play, she said she’d read up on it. So, I conducted my own research. I can’t just go with whatever everyone says. Even Brit, though I love her.

BUT SHE WAS RIGHT.

Mercury’s “retrograde” is actually discounted as ridiculous among scientists. They say, though it appears to be spinning backward, it’s an illusion. But proponents of this phenomena (when we can observe it supposedly spinning backward) say this illusion or reality, whatever the case may be, has an effect on the gravitational pull of the earth, which affects humans in many ways…along the lines of how we process everyday problems, come to conclusions, and produce solutions.

After telling him all of this, Nuggie asked with a little trepidation, “So….. are you experiencing some whacked out emotions?” then… “Is Mercury still in retrograde?“

I laughed, “Pffff! No… Mercury’s retrograde is probably finished by now. But I don’t need no stinkin’ Mercury. I’ve got my own personal retrograde going on here.”

It’s a thing. My own personal retrograde. Be afraid. Be very afraid.

And when we enter into another cycle of Mercury’s retrograde (supposedly around June 15th)… whoa… it could be downright scary.