Yo yo yo, my little darlings! It’s been far too long!

I have missed you lovely boys and girls SO MUCH!

Though I planned, plotted, schemed and organized until I was about to drop dead from the exhaustion (including my time IN Vegas),  I am quite satisfied that Nuggie’s birthday weekend was an incredible success!  (PS: If you are new here, “Nuggie” is the alias for my man.  I only divulge the names of friends and family who agree, or want to make an appearance in my blog/vlogs. Otherwise I have changed their names to protect their identities.  Because – HEY! What happens in Ms. Cheevious-land, STAYS in Ms. Cheevious-land!! Mwaaa-haaa-ha-haaaaa!  But you can see a complete list of the characters who make their appearances in one of my blog “about” pages here – http://www.mscheevious.com/about-2/).

So, without further adieu I am diving right in to the play-by-play of the weekend. Stick around, because near the end I give some reviews on restaurants/bars (i heart nine.nine.nine.nine.nine. hint! hint!), AND I have created a “Highlights Video” just for you! xo

Here is the LOVELY AGENDA I put together. 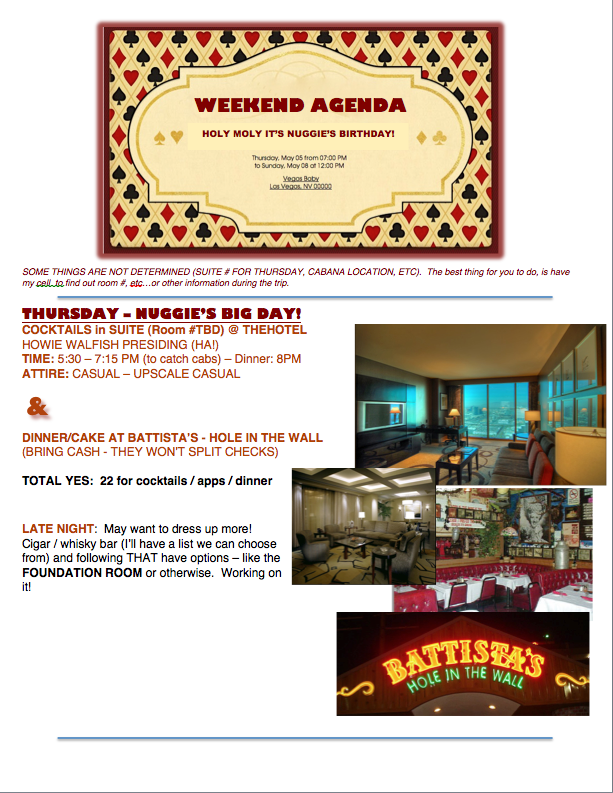 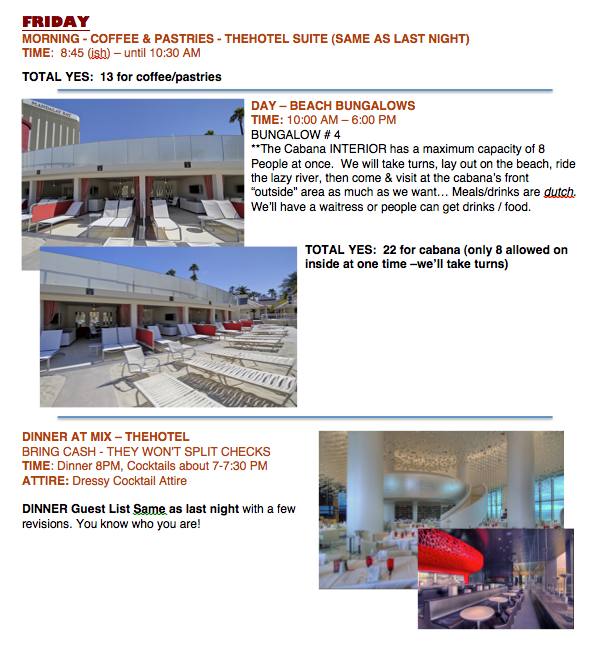 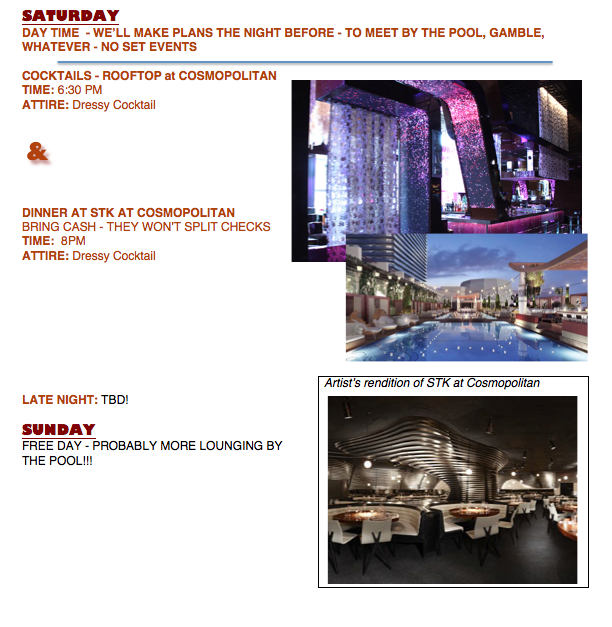 There it is people!  Everything went off without a hitch…

We experienced a couple of snafu’s which required some fancy footwork at times, but here is the low-down for you.  Be sure to make MENTAL NOTES of who to patronize the next time you are in Vegas.  Listen up people:

That did not bode well at ALL with Ms. Cheevious, publicist to the stars (with some of those very people in attendance)!  Okay.  So I get the law thing, and one could argue my guest should have carried her ID with her in Vegas.

BUT – I contended that the management, KNOWING FULL WELL I was the event planner of this evening, having agreed to allow us into the club, should have informed me ahead of time of that law, so I could inform my guests.

Additionally,  I told the General Manager of the restaurant that we’d visited several clubs all around Vegas the night prior, INCLUDING clubs within their SAME property, and yet we had not run into this problem (the guest didn’t carry her ID that night either).  I also explained very nicely, how I didn’t see why they could not make an exception for one person who was obviously over 21 years of age.  He refused.

I’ll cut to the chase on this one:  They screwed up on our dinner reservation, which meant NO ROOFTOP COCKTAILS, NO DINNER AT STK. NOTHING.

They had us down for FRIDAY night, when all along (and I had the email stream to prove it) we wanted Saturday night.  It was a mere typo of mine in a very early email, where I’d referred to our reservation as Saturday May 6th (it was the 7th – and from there on out, was never referred to again), that they took the DATE rather than the NIGHT and went with it – without checking with me.

So, all day Friday by the pool, fingers blazing a trail on my iPhone – lighting it up on fire, with the help of one FANTASTIC set of individuals named BRONSON, PASQUALE & JESSE, made arrangements for 12+ people  for dinner and party time on Saturday night – event though Vegas was crazy that night with a major FIGHT, as well as it being night after Kentucky Derby! OY.

Who wins the prize for ABSOLUTE BEST of VEGAS though?

THE ABSOLUTE BEST OF VEGAS PRIZE GOES TO:

The management team (specifically within the Nine Group, Las Vegas) was STELLAR – and INCOMPARABLE to anyone else in Las Vegas. They’d already put me in touch with someone to contact (prior to the “Great Cosmopolitan Screw Up”) so that our party of 15+ people would be admitted into any club we wanted at the hotel, but once they got wind of what happened with Cosmopolitan, they just FIXED it.  SUPERB.  UTTERLY FANTASTIC.

Here is the review of NINE STEAKHOUSE:

PHENOMINAL.  EVERY BITE WAS SUPERB. EVERYONE AT OUR TABLE AGREED.

EXCEPTIONAL.  HEAD AND SHOULDERS WAYYYYY ABOVE THE REST. HANDS DOWN.  DO NOT TRUST ANYONE ELSE!

Please be sure to BOOK A RESERVATION AT NINE STEAKHOUSE the next time you are in Vegas!  http://www.n9negroup.com/#/n9ne/main/

From there, we went to GHOST BAR (SUPER FUN, GREAT VIEWS OF THE CITY) & danced, played, had a blast.  Then we moved on to the Playboy Club and danced the night away.

To book a stay at the Palms Casino, click here.

If you were wondering – the other clients in attendance were Bogey & Bacall.  You’ll have to check my 2nd About Page to get a clue though!

If you can’t see this in your email (for you subscribers), here is the youtube link. It’s FUN: http://www.youtube.com/watch?v=7ezXDVyGrJA

There you have it! Stay tuned for more fun, videos, life and… ENJOYING EVERY MOMENT.

6 Responses to "I Heart Vegas… Mostly"