Hey, do you remember the time I told you how my rote memory was going, and I almost went to the bathroom while my sexy undies were still on? Lord knows you should. It was only yesterday. Hey, I don’t blame you if you don’t remember. You should know it’s a personal rule for me to always answer no first and correct myself later when asked these types of questions. It’s safer.

You wouldn’t be out of line to question what this has to do with the smokin’ hot image of Victoria & David Beckham here. You’re extremely clever. But I’ll give you my reason very soon. I promise.

Where were we?  My rote memory was shot…

But I have to apologize before continuing because I withheld an important piece of information from you when I relayed that story. So there was that thing… the almost tinkling in a perfectly lovely pair of undies thing. And then there was this: A little while later I showed up A DAY EARLY to my prospective literary agent’s backyard barbecue.

The list of things which ruffle my feathers may elude you, because I don’t always share what really gets my goat (crosses fingers behind back). But watch me schlep my primped, made up, dressed up and fussed over bohiney into the “city” (because more than a mile east of the beach is the city) for an affair that requires I wear anything other than my pajamas or my workout clothes, A DAY EARLY, and suddenly I’m doing a BIG REVEAL:

Even worse is the fact that I couldn’t proclaim as I’d always envisioned in moments like this “Heads Will Roll.” These proclamations are no good to ones self. And my head rolling around is not on the other list. You know, the bucket list. So, that was out.

Nuggie and I looked fabulous too, all summery and coiffed, bearing one of my famously beautiful salads. 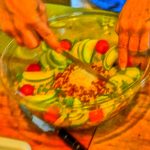 When my agent’s husband answered the door with, “You’re a day early,” I thought he had a very dry sense of humor.

So, we laughed and joked, and I amazed myself with just how GREAT I am at throwing out statements to make everyone else feel better in an awkward moment. I rattled off with turrets-like finesse something like “Thank GOD we had the wrong day. We weren’t going to be able to stay long because of three other parties we have to go to!”

I’d like to stop here to remind you of an important thing:  When I die, if you come to my funeral, you can now stand up and say “She was an incredibly talented liar, but she used her talents for good.”

My agent (and I call her that, because you know, mind over matter) was very kind and said we looked so fabulous, and even asked us to wear the same thing the next day.

When we showed up in pretty much the same clothes the next day, we were having a ball meeting an entirely different group of people…

But then it happened.

Not one or two, but three separate people asked basically the same question about Nuggie and I.

Are you two married?

Ahhh… Are you together? How long have you been together?

Five years… We live together.

So, what are you to each other?

– OR – What do you call yourselves?

– OR – We’re boyfriend and girlfriend

Dahhhhling, if you live together you are no longer “dating” are you?

– OR – Boyfriend and girlfriend is for children, isn’t it?

So the polite versions of Nuggie and I (as opposed to the fun-loving, sarcastic, tipsy versions we prefer in these instances) obliged our new friends with talk of terminology:  life-partners, domestic partners, the “ers” of the day.

We were at this party for the SECOND time and we couldn’t come back with something clever.

Next time, I’m going to open up the vaults and tell them what I should have said all along:  “We’re LOVE SLAVES….

And that’s not too far from the truth. Ask Nuggie how often I call him “the boss of me.” He accepts the position with pride.