One of the great things about being able to work at home is that I get to wake up and walk straight to my desk, sans makeup, hair-brushing, teeth brushing, and regular clothes. If I’m lucky I have left-over coffee (oh yes, it gets better) that I can heat up so I don’t have to wait my turn for the coffee pot (M.C. drinks fully leaded, and generally remembers every night to program his coffee in, so I simply defer to whatever happened or was left-over from the night before). After I’ve started up the Big Screen, answered any pressing emails, checked in with my networking groups and pages on Facebook, and answered all of the droves of questions on all ten or so of my Twitterverse accounts via Tweetdeck, I generally shuffle away from the Big Screen to make fresh coffee, brush the teeth and get back to my desk. I get that this is pure paradise rolled up into one big huge ball of privilege, I really do. I am incredibly lucky to do what I do from my home “office.” 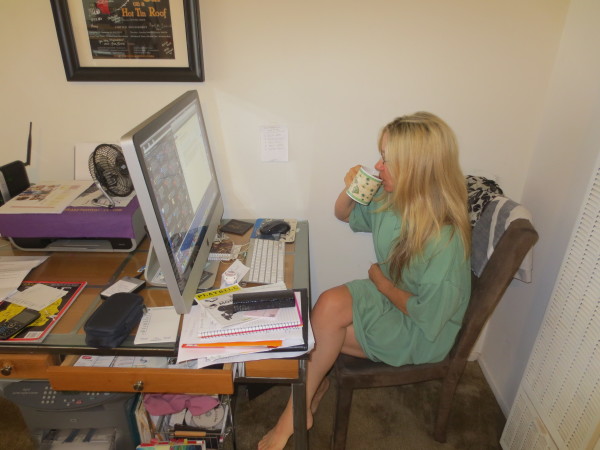 That isn’t to say that working at home doesn’t have it’s drawbacks.  I could name any number of them, and I would take odds on how many of you would say that all of the above paragraph are drawbacks. But there are plenty, one of which is the fact that on days without appointments or meetings, unless I have a workout class, I sit in my big PJ tee shirt and underwear most of the day. If I do have a workout to go to, I end up in my yoga pants and tank top all day. Let’s just say Nuggie prefers when I have a workout to go to. (Although he might have warmed up to the whole pajama idea if said pajamas were at least (ehem– insert shameless ad-link) sexy).

Granted, when I stopped working full-time in a job where I wore a suit or some combination of professional attire on a daily basis, I was over the moon at the fact I could roll out of bed and be at work in no time, with little or no effort.

But this? This is definitely a work-at-home situation in need of resolution.

10 Responses to "A work-at-home situation that needs resolution"