So, the date was December 19, 2009. M.C. and I hosted a little holiday party at my place. It was awesome. People came and went. A couple of my clients stopped by, as well as some family… It was the usual holiday get-together.  That is, until about 2:00 am.

That’s when all that remained were me, M.C. and a couple of our friends who decided to stick around and gab. At one point we decided to start taking photos to remember the evening.

I was the first designated photographer (and last – you’ll see why in a second). I moved in to get a great shot, and leaned over to get an even  “better” angle of the three of them.  I didn’t realize I was dangerously close to a taper candle M.C. lit earlier that evening.

My girlfriend gasped and said, “Lisa! Your hair’s, on fire!” I shrugged it off and patted it out… or so I thought, until she continued, “No! It’s REALLY on fire!”

Just then M.C. took two very large strides in my direction and somehow patted the flames out — VERY quickly.  (Actually all of that happened in a matter of seconds).

That was it for the photo session!  I ran to my bathroom to observe the damage, and believe it or not, there was NO VISIBLE DAMAGE?  I am NOT kidding!  That’s what I get for accommodating my friends and being the designated photog!  Ha!

The only thing I can think of which may have prevented my hair from going “POOF!” and literally bursting into flames, however, is that I’d been using a new hair product for a while (that day and evening included). It was a heat protector to be used prior to flat-ironing your hair.  I’d been in search of something like it for years, and when I found it a few months back, I immediately began to use it.  It protects your hair up to 475 degrees, Fahrenheit.  So – I am thinking it had to have some sort of FLAME RETARDANT in the mix!  Ha ha!  Is that CRAZY or WHAT?

So, here is a picture of me with some super imposed flames on my hair.  I never got any pictures of myself that evening… as I mentioned!  By the time we got around to taking photos, my hair burst into flames!  HA HA!

I’m told this is how big the flame was (or at least this is how I imagined it based on the saucer-sized eye balls my girlfriend had)!! 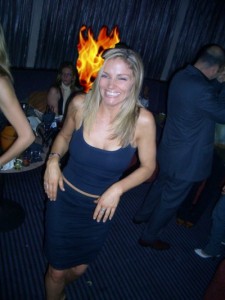 What’s funny is that about a week later, my girlfriend called me up to tell me that I must have angels around me, because my whole head of hair was engulfed in flames, and there was NO damage.  We were laughing about it.  I told her about my little product, which, of course, she asked me to pick up for her the next time I saw it.

Fast forward to this past Wednesday.  She was back at my house, prior to an event I was taking her to (she is also a client of mine).  It was the People’s Choice Awards Post Celebration Party Benefiting Britticares (for kids with cancer).  Long story short, I was still finishing up my “flat-iron” routine when she arrived, so she chatted with me while I finished up.  My “product” was sitting on the counter, and I held it up to her.  And I swear, it was the FIRST time I’d actually paid any attention to the name, but it was called “GUARDIAN ANGEL.”  I kid you NOT.  Pretty funny!  We CRACKED UP at the fact that not only did I have angels around me, but I also had a GUARDIAN ANGEL – in a BOTTLE!  Ha!

And – of course, without further adieu – here it is, my friends. My “Guardian Angel”:

Be sure to click this link and buy it now (shameless plug, I know).

So – we laughed and went off to enjoy a fabulous night at the People’s Choice Awards Post Celebration.  It was a fantastic event, and my girl and another celebrity friend were photographed, interviewed, hit up for autographs – the whole shebang (sp?).

Whew!  I’m SOOO glad I can take that one off the list! I now know what it’s like to be ON FIRE.

Have a fantastic weekend you marvelously gorgeous humans!