Last month I flew home for three days to help my family do a spruce up of our childhood home. I come from a family of 11 – yes ELEVEN – kids from the same set of biological parents. We were raised Catholic. I have my own set of excuses I like to give for how 11 kids came about… “My mom was Catholic and my dad was easy…”, “My dad was in the navy, so my mom got pregnant every time he came home”… “I was adopted.” You get the idea.

Our family home is on the market, but was in dire need of serious attention, so, off I went.

When I say that my family and I did this, I’m exaggerating. Sure, twelve people were present and accounted for:

Me and my three sisters (Pah-tay, Ice-tay and Smart-tay – all of the “tays” were in my Capers of the Sherwood Kind video);

Our lovely former sis-in-law Hot-Tay and her beau;

Two of Smart-tay’s lovely daughters (our nieces), a grand-niece and one of Bliss-Niece’s good friends (all came from out of town to help);

One of our brothers (when he wasn’t working – about a half a day – throughout the weekend);

A girl I went to school with in third grade who was crazy (I mean lovely) enough to respond to my begging and pleading on Facebook;

When I say that we spruced up the home, I mean we prepped a seven bedroom home, the doors, light fixtures, fireplace, trim etc. We painted four of the bedrooms, most of the main rooms (kitchen, living room, den, bathroom), and we did things like repair lights that were falling out of the ceiling, linoleum that was peeling up and so on. We also strategically placed throw rugs to cover flooring that would be replaced when the house sells. IN TWO DAYS.

WE ROCKED THAT THING.

On Saturday night our youngest brother invited us (his sisters) to come out to hear his band perform at a bar in town. Smar-Tay and Ice-Tay, the two oldest, declined. They don’t “do” clubs anymore. That left me, Pah-tay and Hot-tay to represent for our brother. We were exhausted and covered in paint, but something about live music at a club (and copious amounts of cocktails) holds a certain appeal and makes a girl want to make an effort. Plus, we felt it was a great opportunity to show our brother that we support him and our family, regardless of circumstances.

IMPORTANT NOTE: Our little rock-n-roll brother did not grace our family’s home once during the weekend, even on his day off. Two other of our brothers didn’t make it for various other reasons. (Okay, one of them cut the tip of his finger off, and the other was in rehab… EXCUSES, EXCUSES).

But THIS? This begs the question, “Why show up in support of little rocker brother, when he didn’t support you?” which demands the answer: BECAUSE THIS IS WHAT FAMILY DOES. We (my sisters and I) are not barbarians, for goddsakes.

Here is what our family’s home looked like on Monday morning, as we laid down the last of the throw rugs, and Pah-tay and I drove to the airport to fly home: 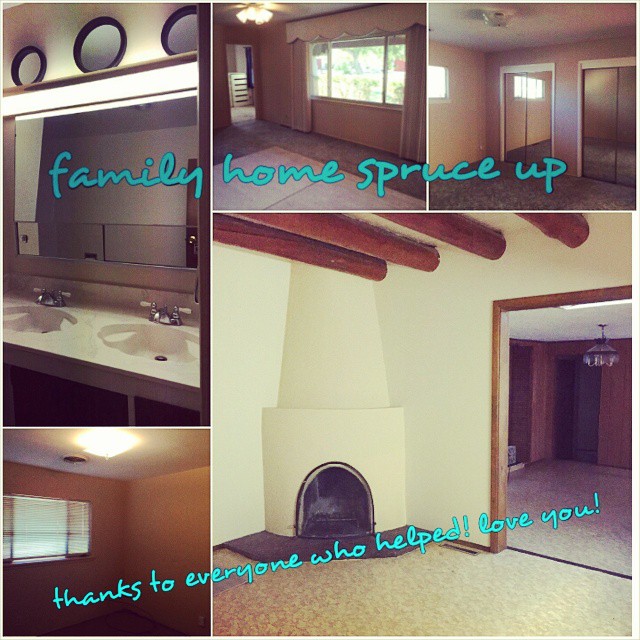 By the way – if you’re an actor, producer, director, or just someone who loves the Southwest, and you’re looking for an affordable place to shack up in Albuquerque, maybe so you can ride the New Mexico Entertainment Industry Gravy Train… Have I got a property for you! And it’s SUPER AFFORDABLE, with a swimming pool, on corner lot, with TONS OF SPACE, and two blocks from the Catholic church. Need I say more?

I’d buy it if I could, because dangit – it’s a great house. SNIFF SNIFF.

#MomFactor: Teach your sons to be chivalrous, valiant, and to protect, love and support their sisters.

11 Responses to "This is what family does"