Okay everyone!  Here’s a little bonus post to launch us into the new year.  If you are new HERE – well, geez, WELCOME!  I love that you’ve stopped by!  Be sure and post something on your way out, would ya? Thanks!  🙂 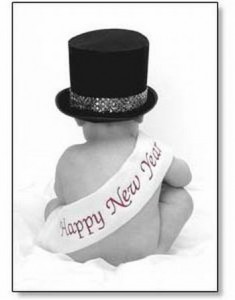 With the New Year now in full swing, (and after one of the toughest years for most everyone out there – both fiscally, and mentally – due to the barrage of garbage that was drilled into our brains – ad nauseum, infinitum – in the form of stupid statements like “the sucky economy” or “you know… they couldn’t hire so-n-so, because business is so bad”, and all manner of other trash-talk stuff), I decided it’s time to talk about being single. HA! HA!

I know.  I know. Why talk about being single?  Why such a departure from the whole “the economy sucks” rant?  Well, it’s not such a departure.  It’s actually related in a twisted sort of way.  And besides, we all know that the neuro-paths in my brain are a little twisted, so try and keep up, would ya?

Basically – I KNOW for a fact that some of you out there worked yourselves up into little frenzies and created disappointing NYE’s for yourselves – all because you had a picture of what was suppose to happen when the clock struck midnight. Indulge me here:

If you’re a guy, admit it.  You imagined that if things went your way, you were gonna’ be with one of the hottest girls around.  You planned that if you did all the right things to romance her in the weeks, days and hours leading up to that midnight kiss on New Years Eve (open doors for her, help her with her jacket, take her out for drinks with your sacred inner circle of guy friends, make her feel special, even call to make sure she is safe at home if she drives on her own, etc… etc… blah, blah, blah) that you’d be sure to “get some.”  Because in your mind the kiss was just the beginning.  Mannn oh man, if you played your cards right you were gonna’ get some, and get some GOOD.  You were gonna’ have some of your very own New Year’s Eve-fireworks.  It didn’t matter that your girl was probably thinking as the two of you moved in for the kiss, that the two of you were “ushering in the New Year – together: Partners, walking hand-in-hand (together), into a sea of happiness… forging a future full of good memories… TOGETHER.”  All you were thinking was, “Bring it on, baby! I’ve been working HARD for this night!” And that was about it!

And you girlie girls out there… those of you who are of the single variety.  Yes, I am talking to you now.  You who tried your hardest to have a date on New Year’s Eve, if only to relieve the stress or embarrassment of having no special “someone” to kiss at the strike of midnight.  You know it’s true.  If you aren’t in a relationship at the moment, you KNOW it was all only about that very moment… more-so than whether or not you really actually LIKED the guy.  But worse, if you DID like the guy, you built that moment up into some incredibly heavily weighted moment, that no person can live up to.  You imagined the two of you would smooch, share an intense emotional tie, and move forward into the new year as a newly bonded couple, and plan the days and weeks ahead together. And if you were flying solo on New Year’s Eve, out with the girls, you KNOW it was an important thing for most of you to find someone “suitable,” who you could flirt and play cat and mouse with, and then hopefully get a smooch out of it at midnight as well.  Am I right?

I’m just sayin’ people.  What the HECK is so wrong with being single?  What the HECK would have been so bad about being at the bar, and NOT kissing anyone – except maybe good friends on the cheek, or whatever – when that clock struck midnight? How hard IS it REALLY to enjoy oneself as a single individual?

A very shrewd single gal said recently, “Being single is NOT a condition that needs a cure.”

And, please don’t preach to me about how I have M.C. Nugget, and perhaps I can’t relate, or whatever else you’d like to use to justify any sort of erratic obsessive-compulsive behavior.  I’ve been single plenty in my life, and I am still single today.  I am not engaged, or married, or in any sort of what most people would consider a “traditional” relationship.  I too, realize I am not getting any younger, and old age is slowly working its way toward little ole’ me.  Age spares no one.  But I am only getting BETTER BABY.  Age can come and kiss my cute little tuckus.  HA!  The fact that M.C. and I call each other boyfriend/girlfriend is really incidental, and it took us over nine months of dating to do so, as we were both so happy being single ourselves, that we didn’t want to “label” and ruin it!  Yes, I loved being with him on New Year’s Eve and was very glad to kiss only him when the clock struck twelve.  But that’s besides the point.

The fact is – I am so tired of people being so unhappy with their lot in life that they manipulate and commit all manner of craziness – all for the sake of “getting” happy, or “finding” happiness.  Don’t you get it?  You need to be happy with life as you ARE.  Realize what a great person you ARE without anyone else.  Put yourself in a position of power, so that you can pick and choose and be selective.  Then, when that girl or guy comes along that is perfect for you, you’ll actually be capable of SEEING him or her when they are in FRONT of you!

So – my advice this year girls and boys?  One guess.  Get happy being you – all alone.  Get to know yourself and fall in love with who you are – what makes up everything about you.  If you have work to do on you – DO IT.  YOU are WORTH it.  Get in shape, lean out those bodies, or get a massage… whatever works for you.  But GET HAPPY WITH YOU – all by your lonesome.  Then and only then will you be ready – IF YOU WANT – to allow someone else into your great little life to participate!

Now go out there and have some fun with your bad-ass self, would you?  As I promised, my next regular post will dish on some really fantastic Hollywood events I’ve been able to take some clients to lately!  Stay tuned!