M.C. Nugget and I went to a dinner party in the Los Felis / Silverlake area of Los Angeles tonight. It was at a friend of Nuggie’s who I’ll call Nola here (because she and her hubby also have a home and live a good amount of time in New Orleans). Nuggie’s known Nola and her husband for many years, and she is somewhat of a retired (or perhaps trying to retire) television writer. She is a hoot, and though she claims she is not domestic (she orders carry out for her dinner parties) she was also the one of the mostest hostesses I’ve ever met. And the dinner guests were an interesting mix of people too. They seemed to love life as much as we do and (perhaps not so coincidentally) work in or have worked in the entertainment business. What made the guests cool too is despite their chosen career paths, they still seemed sane and have managed to hold onto their souls.

Fun fun times, I tell ya.

But on to the reason for my post: An interesting topic of conversation ensued at one point, because Nola is a dog lover. She was talking about her current dogs’ personalities vs. her previous dogs, and then comparing them to other breeds. Then the subject of Chihuahuas came up (don’t ask why) and she rolled her eyes. “Those dogs are very loyal to ONE person. You two could own one, but it would either like you or Nuggie. Not both.” She told us about how her son traveled around the world, and in one of his trips to one of those now “forbidden to outsiders” countries, he was introduced to a dignitary. When he went to the dignitary’s home, the guy owned hundreds of Chihuahuas, which served not really so much as guard dogs, but more along the lines of piranha.

I could totally picture it. Imagine how utterly annoying it would be for a thousand little chihuahuas to charge at you all at once! And the yapping — Oh, the endless yapping! Oy!

Well, I’m sorry if I seem irreverent, but hey – I am. This just cracked me up. I couldn’t help but muster up my most evil, Dr. Evil voice and say “RELEASE the CHIHUAHUAS!”

So, I’ve decided that instead of buying Nuggie a cute snorty, squatty, chubby bulldog that he could name after some cute little flower, I am now going to save up and by him a hundred Chihuahuas, just so when he gets most annoyed at various idiots, he too can say “Release the Chihuahuas!” in his most evil and sinister voice… or at the very least he can warn, “Don’t make me or my dogs go all Chihuahua up in your face…” 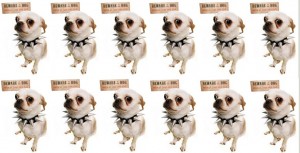 Wouldn’t that be simply grand?

Thought I’d pass that little tidbit on to you. Ten hundred thousand hay pennies to the person who can guess which country uses Chihuahuas as piranha… and no fair using BING.

Have a fantastic weekend everyone!