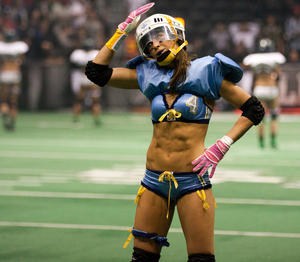 You may recall that my man and I were able to catch the Lingerie Football League Superbowl game in Miami, while there for the actual NFL Superbowl. I talked about it in the post “SAINTS Bitch!” and if you are a “friend” on Facebook, you saw the photos from the game.  I said then, and I meant it, that I would love to play for the Los Angeles Temptation.  I am a HUGE football fan, and exceptionally athletic.  I think it would be an absolute BLAST.

Well, kiddos… that opportunity is about to present itself.  I just found out last Saturday that the LFL is hosting open tryouts this coming Saturday, the 24th (I know, not much notice… it’s a good thing I am athletic and try to stay fit year round)!

So, the only thing that concerned me, is that like they do on American Idol – the LFL may have an age limit – or at least an unwritten one.  I contacted them, and they said there is no age limit.  But they may want to portray an image of only the hottest, youngest chicks – which I wouldn’t blame them for.  But I am leaving it to you people to tell me your thoughts.  I still may choose to simply watch the tryouts this year, and make a decision to try out next year – but the biological clock is tickin’ if ya know whatta mean… So, I am wondering if you all think I should just GO for it?

The questionnaire / application asks us what we’ve done – sports-wise – and I’ve done plenty.  Except, of course, play football. I’ve figure skated, run track, weight trained (body building), rock climbed (the real kind, more than once a week), and practiced yoga and pilates for several years.  But still.  I do NOT want to show up at the try outs and have them raise their eyebrows, snicker and tell me to forget it.

Also – they ask the new recruits to bring a photo to leave behind.  I will probably take one that looks more like one of the LINGERIE FOOTBALL players – in my sports bra and workout shorts, but here are a few of me in similar attire to give you an idea.  You tell me what you think. Should I be wise and just WATCH try outs this year?  Or should I GO FOR IT?

I don’t compare in any way shape or form to the lady in the photo above, who’s abs could cut through steel. But I try.

That’s it for now my beautiful little blog-ites.  Stay tuned next week for my decision, and the subsequent videos / pics to go along (if I do it).

Have a fantastic rest of your week boys and girls!