We’re pleased to launch a new series for MsCheevious.com, entitled Things We Enjoyed This Week. (And by ‘we” of course, “we” mean me – Editor in (Mis) Chief, and primary writer here). This little nugget will come to you as frequent as those things we enjoy are revealed to us – and equally as seldom. Let’s try not to keep track, shall we?

Why: It’s intelligent, interesting and doesn’t take itself too seriously. It’s also environmentally friendly (in this month’s note from David Granger, Editor in Chief, he cleverly wove his obsession with energy into an interesting and witty introduction of an article on the United States’ use of oil and the tar sands. Sounds dry, but he forayed that into a teaser-finish on a article still brewing about natural gas, and, he was able to “still be crazily entertaining.”).

It’s a page devoted to requests by readers, and this little gem shows up in the Front of Book, which means there’s a boat load of good, meaty reading to follow.

Kudos to the magazine for recognizing that its writers and editors don’t hold an exclusive on good ideas.

Our favorite from this page? Recent Birth Announcements by A.J. Jacobs.

Jacobs brings little known current events as well as social mores or cultural quips to our attention in the form of witty birth announcements (Below are re-config’d samples – a cheap attempt at replicating what you will see in the magazine): 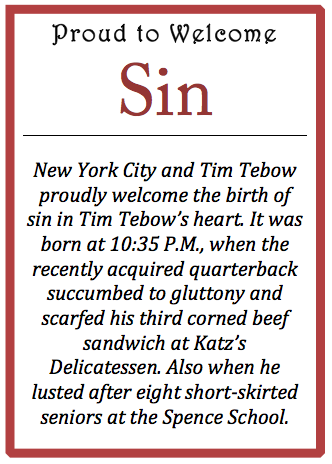 To see what’s in the issue in a nutshell go to the Esquire Magazine website:

Enjoy Every Moment my lovelies.