Ms. Cheevious Note: This week, we’re participating in a virtual book tour for the popular Sex, Life & Hannah fictional series by author Dorota Skrzypek.  The third book in Dorota’s jaw-dropping, frank, and relatable book series Sex, Life, & Hannah, Summer Season, is due this July. The book release party will be held at Book Soup in Los Angeles on Friday, July 20th at 7PM (link below). Follow the rest of Dorota’s virtual book tour for an opportunity to win all three of her books here!

Below is an excerpt from chapter 19.  Read it. Then, whether you love it, are incensed by it, or thrilled — TALK about it!  “Share” and Tweet your comments my lovelies. Let’s show Dorota what Ms. Cheevious people can do.

I’m working on smoky eyes in front of my mirror, to match my long-sleeved black-cuffed mauve blouse and tight black leather shorts outfit. Butterflies in my stomach.

Three years ago, maybe even to the day, my relationship with Christian turned into an affair. I didn’t plan it that way; it just happened.

I suppose the circumstances were right. Even though The Ex and I were working on working things out, deep down inside I hated him for putting me through everything he had. It was our roughest year yet, and I was quite sure The Ex was fucking whomever he wanted to as well. For the most part, we were just keeping up appearances for our family, because they were convinced that they would still get their wedding.

I do have regret for the way I handled the situation. I know I should have dealt with it like a mature adult, whatever that means. All I can say is, I never intended on having an affair; but sometimes when you’re in a relationship, you meet someone else who fills voids that your existing relationship just doesn’t fill. Or maybe you meet someone who brings escape from the problems of your existing relationship. Or maybe you just meet someone who throws you for a loop, blows your socks off, and intrigues you like you never expected.

If at first Christian’s undivulge-able absences made my palms sweat, they soon turned into a type of foreplay, which only made my fascination for him grow. He would write me these e-mails…about what he was doing, and what he wanted to do with me—even to me sometimes—and it was all very provocative. And when he was here, I would escape to his house for a long game of chess over a bottle of wine, giving him a place to rest his head and me a moment to find……whatever it was that I was looking for.

I loved The Ex, but we’d had a dysfunctional relationship from the very beginning. One day we would be madly in love; the next day we would be screaming at each other. Our brief engagement was just another piece of evidence that we probably didn’t have what it took to make things work long-term. 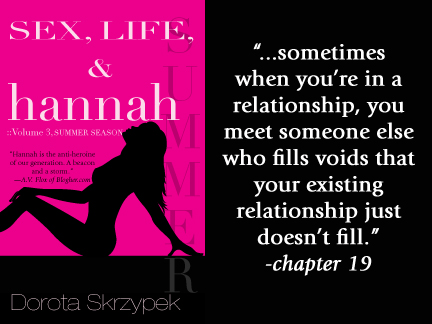 Christian and I didn’t have those problems. Of course, Christian and I also didn’t see each other on a regular basis, so we never had to face the daily grind of a real courtship. It was more idealistic—an unfair comparison, I know, to my in-the-trenches life with The Ex. But at the time, Christian was…my peace in times of war. He made me feel good when The Ex made me feel smaller than a speck of dirt. Christian put a smile on my face when I didn’t think I could smile again. Christian Knight became the knight in shining armor that I’d always thought The Ex should be.

I fantasized that one day, when he returned from one of his covert missions, Christian would show up on my doorstep and tell me he loved me and wanted to be with me forever, giving me the reason I needed to break up with The Ex for good. He would take me away from everything that made me despair, whisk me away to his kingdom that I knew so little about—except that it was far, far away—and we would live happily ever after. But that never happened. My relationship with Christian was as much a fantasy in my mind as it was in reality. He was an enigma, and I feared our association would forever keep itself in this one dimension. So after a year, I put an end to it.

It was an end though, without an official ending. I just stopped responding to his phone calls and e-mails, and he eventually stopped calling and writing. But every now and then I would catch myself thinking about Christian Knight, still wishing he would rescue me. 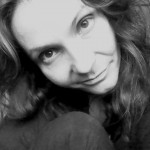 Dorota Skrzypek was born in Poland, grew-up in Canada, and moved to Southern California in 1997. After many years of flying airplanes, designing airports, and dating a swarm of eligible bachelors, she decided to focus on writing fiction. Sex, Life, & Hannah is Dorota’s juicy woman-on-top book series chronicling the exploits of Hannah, a female professional trying desperately to make sense of the L.A. single life. Through broken hearts, broken dreams, and nearly-broken bed frames (yes—there is a lot of sex), Hannah grapples with the modern late-twenty-something’s conundrum: Does the fairytale life exist, and is it worth having? You can find all three books in the Sex, Life, & Hannah series on Amazon (www.amazon.com) and atwww.sexlifeandhannah.com.

The Book Release Party for Sex, Life and Hannah, Summer Season will be held at Book Soup in Los Angeles on Friday, July 20th at 7PM (http://www.sexlifeandhannah.com/summer-season-book-launch/).