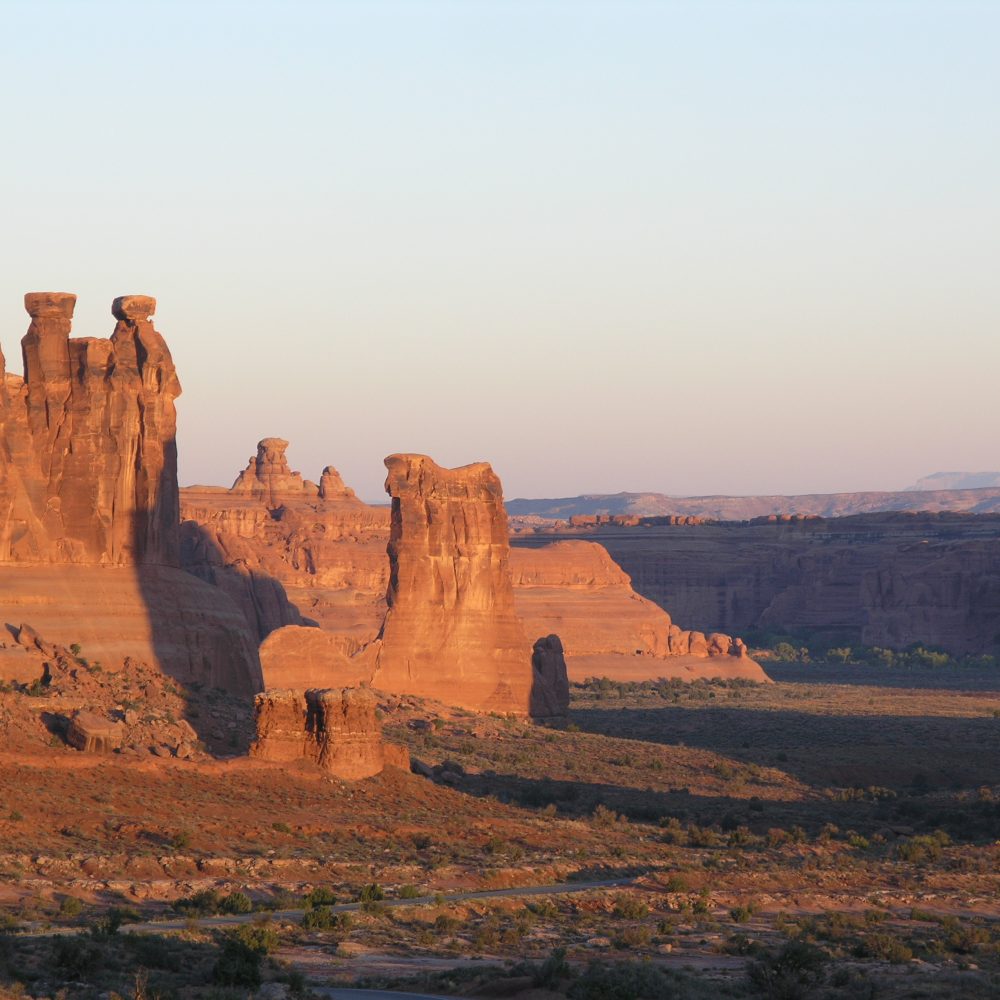 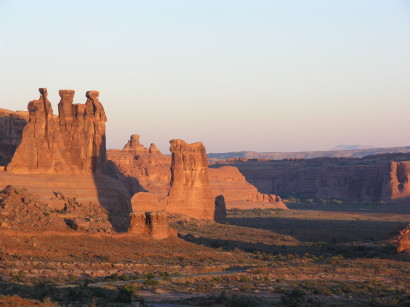 It’s January, 2008, and as the snow dumps at record proportions outside my window in Aspen, Colorado – I am reminded of a little trip I took last fall.  It was just before the first snowfall, when the leaves were still turning gold, and the crisp evening air required lots of layering, warmer sweaters and all the yummy snugly apparel that makes one anticipate the fall.

It all began on Thursday, September 20, 2007, when I packed up my car and headed west to Moab.

No. It’s not in the Middle East, somewhere. The original Moab (or the Moab some may have heard of), circa “old testament” was indeed in the middle east, and those Moabites wreaked havoc on the Israelites.  They were certainly a force to be reckoned with, from what I hear.

Moab, Utah, though it’s historic reputation of being home  and jail  to some surly wild west criminals back in the day may rival that of the middle eastern Moab, is not quite so infamous. These days Moab, Utah is most known for being home to the famous Arches National Park (pictured above), and for being a favorite destination for extreme sports (biking, rock-climbing and hiking) fanatics.  I have a little house there, and though the turning of the leaves that occurs in autumn in Aspen is really something to see and often awe-inspiring, I was ready to get out of Dodge.  The dew on the grass, and the chill in air was enough to scare even hard-core golden leaf fans. I just knew if I didn’t leave, I’d be dealing with the first snowfall, and I wasn’t quite ready to let go of summer!  (How far away and unfathomable that feeling is now, as the snow piles to twelve feet on the side of the road)!

Back then, I had just returned to Aspen from the Santa Barbara coast, with the sheer bliss of the ocean breeze, together with balmy, 75 degree temps and surrounded by REAL bronze tans (with salt-water-pelted skin). And with 80 degree weather still the norm in Moab, getting out of Aspen was something to look forward to!

So, I headed west toward Moab, careful not to miss exit, 182.  Not this time.

You’d think I’d know my way to my own home – even if it is a part-time residence, wouldn’t you?  In my defense, I just love a good road trip. It’s very cathartic for me.  I get some much-needed thinking and problem solving done.  I also day-dream quite a bit, but I’ve learned (the hard way) that there is a certain point on the highway when I really have to pay attention to where I am.  I once ended up in Green River, Utah and hadn’t even realized I’d gone too far!  I pulled off the highway and wondered with awe at the great restaurants and conveniences they’d built since my last trip to Moab, just a few short months ago (I am blond.  I was born that way).  Then I realized I’d gone too far and turned my car around.  I’ve never lived it down, since.  My boyfriend sends friendly reminder text messages to my cell phone, with playful comments like, “Don’t miss 182!” or “Don’t miss the turn!” because of that little jaunt.

But this time, as I drove west toward Moab, I mused about the transition from Colorado into Utah.  It was interesting.  I drove through towns with names like Rifle, Parachute, Silt, and Grand Junction.  Think about it. It definitely can conjure up some wild west sort of images.  Let’s play word association:

Rifle:  guns, hunting, target shooting, pickup trucks and beer with too much time to waste.

Grand Junction:  The place where it all comes together.

‘That is soooo Colorado,’ I thought laughingly, as I drove past a “Caution, Eagles on Highway” sign.  ‘No wonder everyone thinks Colorado is full of cowboys and ranchers!’  It is a tough stigma to live down.  Imagine me, Ms. Cheevious at one of the year’s most anticipated parties – lets say an Oscar party in Hollywood (work with me here – I like to dream big). Tom and Katie (tom-kat) compliment my dress, I smile and nod as I walk by and bump into Leo (you know the guy – DiCaprio), who stops me for a hug and asks where I’ve been.  “I moved to Colorado,” I say.  “Colorado? What prompted that decision?” Now, I know in this instance that Leo is patronizing me. He’s choosing his words carefully.  He’s already imagined a gaggle of cattle ranchers, and eco-nazi hunters touring the mountains in their Hummers and gas-guzzling other vehicles, and he is trying to place me in that landscape. I can relate. I LIVE there, and I am still trying to place me in the landscape!

That said, it is incredibly beautiful country. While places like Colorado and Utah may attract hunters, gun aficionados and all manner of cowboy sorts, it also attracts hard-core, serious athletes. The two states combined are probably second to none in providing training ground for world class Olympians.  The hiking, snow sports (skiing, snowboarding, snowshoeing, etc.), rock climbing, biking and more are virtually limitless, and people come from around the world to get a taste. They (Colorado & Utah) also attract their share of authors, writers, painters, sculptures – true artists – those who break away from the mold, and escape the confines or hustle and bustle of civilization in order to create something truly superb.  I think I fall into the latter group.  Yes, I like to imagine I am a true artEEst. At least that’s my story and I’m sticking to it.  I am definitely an artist – but in reality “true” sounds like a heavy commitment.  Let’s not go there.

Anyhow, we (my boyfriend and I) spent the better part of the fall in Moab.  It was incredibly beautiful with space and air and blue skies, and visibility for miles all around us.  The red cliffs that tower hundreds of feet overhead are awesome and intimidating.  What is not to love?  It was a refreshing reprieve from our crowded lives in Aspen.

In spite of all that wonder and amazement, however, I started to get a little stir crazy toward the end of our stay.  I was ready for some social time, some fun cocktail get-togethers and cultural fare. That stuff doesn’t happen in Moab – at least not for me who knows no one.  It was time to get out of there and get my fill of GIRLY time. Shopping, chick-flicks, yoga class and fantastic meals at restaurants that are not closed due to off-season.

I guess my boyfriend got the hint, (maybe it was that banner I hung over his side of the bed that said, “Help me. I’m suffocating in the beautiful scenery.”) Shortly after I started dropping hints, we packed up and returned to Aspen.

So, as I gaze out the window, and the snow continues to fall, I am reminded that we can never get too much of life’s beautiful scenery.  Wherever you go, there you are.  You know what I mean?  Make the most of every day, and above all, stay true to yourself.  You won’t let yourself down.