YOU MAY HAVE A BIG SCREEN

But is yours outside by the yachts in the marina? 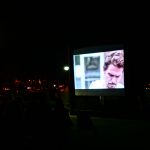 This was the Marina Del Rey Film Festival where our good friend’s film screened on opening night under the stars, along the water.

So, yeah… you may have a big screen, but it’s not as cool as this.

3 Responses to "You may have a big screen"