THESE ARE NO LONGER JUST IN JAPAN

They’re apparently Asics for the Japanese (Tigers). But they’re no longer just in Japan. They’re now in a store on Abbott Kinney in Venice Beach… 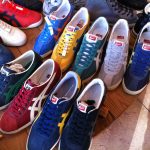 …and in only 24 stores worldwide.

Oh – and in my apartment now… two pairs for my boys (shhh.…Christmas….)

Register to receive these posts once a week by email and get my eBook “Ahhhhh…Haaaaaa Moments with Ms. Cheevious” for FREE as a result. Registration is on the right side bar of every blog post, or on our Facebook page. See you next time. Blog content copyright 2013, LISA JEY DAVIS a.k.a. Ms. Cheevious.

2 Responses to "These are no longer just in Japan"