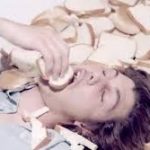 The truth is I LOVE gluten. And no one should be separated from their loved ones for so long.

2 Responses to "Soon my pets… soon"