What do you do when your girlfriend turns into a celebra-stalker and asks P!NK to take a photo with her? 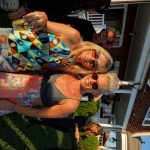 4 Responses to "Pretty and pink"