WHEN NUGGIE WAS MY CARTMAN COACH

Do you guys watch Southpark? I love that show. It’s inane and it makes me laugh (on alternate days, it also makes me want to throw up, but meh… it’s a give and take). The other night I tried and failed miserably to impersonate Cartman (one of the show’s characters). As a matter of fact, I think it was the same night I told you guys about, when Nuggie and I were at happy hour and I thought I should try to put those Bassett Hounds on sets of long legs to see what kind of dogs they would resemble if they weren’t so short and waddle-y.

My impersonation of Cartman was so bad, even I was embarrassed. That’s huge.

M.C. Nugget gave me a pitiful look and laughed in my general direction. Then he graciously tried to teach me how to do a proper “Cartman.”

So there we were… Nuggie and I, strolling down Main Street in Santa Monica, while I tried to say “Paiiiiih” (that’s “pie” in Cartmanese).

I would love to have been a stranger walking behind us to hear our goofball, whacked out exchange that went something like this:

“Do THAT but with a higher pitched voice.”

This, THIS ladies and gentlemen is why Nuggie attended college, and studied acting and dramatic arts in London… so he could help me perfect my Cartman.

And boy is he GOOD.

You see? College is so important. 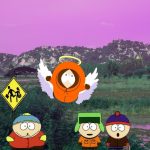 19 Responses to "When Nuggie was my Cartman coach"