File this one under pure mischief and sheer utter silliness, you guys.

The other day Nuggie and I were out sampling the mixology at the Canal Club in Venice Beach (our new cool spot for happy hour), when a guy walked by our window with his Bassett Hound. I think Bassett Hounds may be an endangered species. Seriously. When was the last time you saw one?

As the guy walked by, I looked out the window and marveled. These dogs are actually pretty big dogs if you think about it. Their bodies are pretty large for those short, little legs.

SIDE NOTE: I was also sipping on the best Ginger Martini I’ve ever tasted (though it was really my first) and it packed a punch, so you won’t be surprised what happened next.

I said, “I wonder what Bassett Hounds would look like if they had longer legs?”

As often happens, M.C. Nugget was confused. “What do you mean? Like, what kind of animal?”

“No, I mean, what kind of dog would they look like? Do you think a Labrador?”

“Maybe,” he said. Then he stopped himself short and teased, “What? Are you getting out the lab coat again so you can find out? BRING IN THE LAB COAT!”

“I just might!” I defended. “Think about it! These dogs are very large for those little legs!”

We laughed and I continued:

“I couldn’t very well say ‘Release the Hounds’ with regular Bassett Hounds. They’d only mosey over and waddle to their prey.” (you can tweet that) 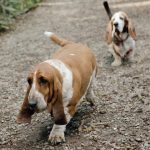 I can’t wait to get my lab coat on and conduct the experiment.

If only I had a lab…or a coat.

TRUST ME: NO ANIMALS WERE, OR WILL EVER BE HARMED BY MS. CHEEVIOUS.

13 Responses to "Release the hounds"