So, M.C. Nugget caught a GIGANTIC cockroach tonight by trapping it in the darkened dome of the bathroom plunger. I thought that was funny, and a little bit scary.

“Those creeps can slime and squeeze their way out of anything.”

He peered closer to observe his trap”Well, he’s not going anywhere right now.”

“Yeah! You better believe it!” I retorted, doing a tough-girl victory strut. “Cuz…” and I launched into my best rendition of “Nanny nanny boo boo!”

That pretty much ended our conversational symmetry.

M.C. looked at me and said, “What the heck is that? Nanny NANNY BOO? BOO?” laughing.

I was a bit shocked and thought initially he was joking, but no. He really didn’t know the phrase.

“Well no, I haven’t ever heard of it” he defended. “I was raised in the cradle of our nation, in the much more formal East coast, for god sakes! I’ve only heard of Honey Boo Boo.”

I proceeded to pull it up on the internet so I could give him the full etymology of the phrase. It supposedly originated as “Nanny Nanny Boo Boo, Stick Your Head in Doo Doo” (though my mother, the proper woman that she was, didn’t allow me to say the last part) and was sung to a British song “Bye Bye Baby Bunting,” which was also not a very nice song to sing to someone in Great Britain, according to the website.

M.C. looked upon my face to try to understand the deeper meaning of what I was saying. After careful consideration he said, “Why do all of the weird things come out after five years?”

And yes, I replied in my taunting sing-songy way, “Nanny nanny boo boo!” 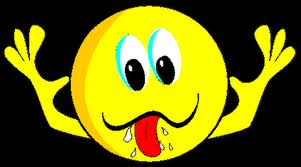