Here is where this works in your favor… 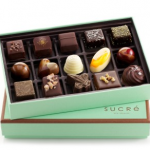 I intimated a few days ago, that I’m giving you all (well one of you) the glorious opportunity to sample some yummy chocolate for free. One of you lucky, chocolate loving readers is going to receive a very special delivery of these little delectables… just keep reading to find out how.

A few weeks ago a company called Sucre contacted me. They thought pretty highly of the blog, and well – you readers, and wanted to send a box of chocolates to one of you. At first I thought, How nice, they want to send something to someone I know and love.

And then I came to my senses.

They wanted to send some chocolate to someone else, you guys!

They wanted to send chocolate… but not to me.

I had to ask my new best friends if they knew who they were dealing with, because clearly, if they did, the chocolate would be on my doorstep, and we wouldn’t be having this discussion. Anyone who follows me on Twitter knows how this would play out.

In case you are not a tweeter, here are just a few of my tweets on the matter:

Chocolate.. the elixir of life, the ender of arguments, the starter of romance, the ignitor of passion…VODKA? The gas on the fire baby!

Any lover of #chocolate (or #vodka… Or #Jameson‘s, for that matter) is a #lover of mine.

Chocolate rates so high in my world, it (as well as vodka) is used to rate products in my Techno Babe Moments videos.

I gotta hand it to those smart people over at Sucre, because a few days later, this arrived on my doorstep: 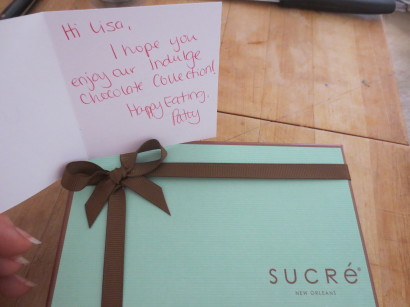 I’m not often derailed from my plan to live a healthy lifestyle (NOT)… but this little package warranted some experimentation. You know, so I could make sure this chocolate was worthy of one of you.

So I tried some. Then, I tried some more. And in an effort to not become a big fat fatty boombalatty, I begged M.C. Nugget to try some.  Here is a little video montage of our chocolate experimentation — all done with you in mind.

If you don’t see the video box above, click here or the image thumbnail below! 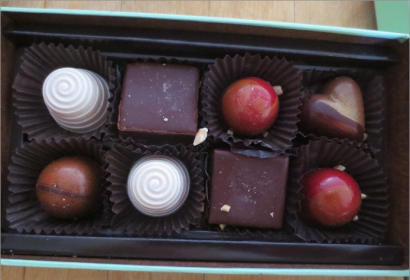 After careful consideration, I’ve decided that Sucre chocolates may now send one of you a box of their chocolates… even though you can tell by the video that I struggled to really like them. But you know… it’s free and all.  Now get to it if you want these little treasures in a box.

TO RECEIVE THIS BOX OF CHOCOLATES:  You must comment here on the blog before October 7, 2013. One random winner / commenter will be chosen to receive their very own box of fabulousness.

30 Responses to "Here is where this works in your favor"