This could work in your favor

I’m jet-lagged, wine sopped, bread clogged and totally time-zone screwy. I returned from Houston late last night, but am still recovering. I need some help. Even though I indulged in whatever was put in front of me in Houston, I’m eating all carbs all the time just to be able to stay awake! If I’m not careful, before the day is done, I’ll be one big giant JABBA-JIGGLE. This could get ugly. To top it off, I received a box looking just like this filled with decadent, delicious chocolates today. 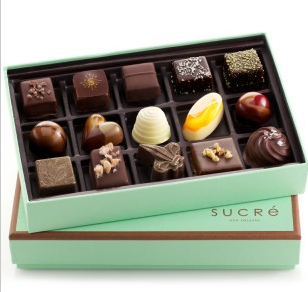 Here’s how this could work for you, though. BEFORE I received this box of yumminess, the great folks at SUCRE CHOCOLATES reached out asking if they could send chocolates to one of YOU, my lovely readers.

My immediate response was, “Shhh-NO! Don’t you people know that my life’s mantra is anything is better with a little chocolate, or vodka, or both?” I let them know I would have to “sample” these supposedly great chocolates, before imposing them on one of you.

So to hell with my jabba-worries. It’s time to JABBA-INDULGE people.

Soon, I’ll offer one of you gorgeous “commenting” readers a chance to win a box all to yourself! It won’t be long… I’ll be over here in my corner conducting my chocolate experiment and JIGGLING up. I’ll let you know how Sucre fares. Then watch for the little contest of YUMMINESS.