So – I took a look online.  A quick google search – oh – say about two weeks ago (you’ll note the video I’m about to share with you was produced within that time frame) revealed PLANKING to be:

The lying down game (also known as planking,[1] or face downs) is an activity, popular in various parts of the world, consisting of lying face down in an unusual or incongruous location. The hands must touch the sides of the body, and having a photograph of the participant taken and posted on the Internet is an integral part of the game.[2] Players compete to find the most unusual and original location in which to play.[2] The location should also be as public as possible, and as many people as possible should be involved. (source: http://en.wikipedia.org/wiki/Lying_down_game) 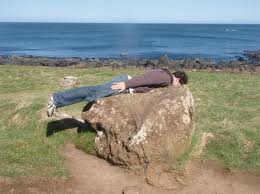 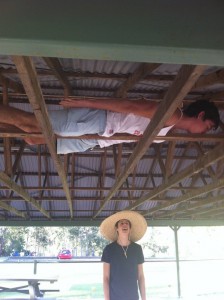 I was understandably appalled at first, given the fact that I am a professional whose daily activity is to foster and promote positive images of my clients, which raise awareness about them – in a positive light (unless of course they are trying to foster a bad-boy or bad-girl image). So, naturally my first thought was ‘I’m glad none of my clients are doing this.  OY. What a ridiculous activity.  What will they think of next?’ and ‘Just how bored ARE people, and how much time do they have on their hands??’

But then I started seeing some of my clients making fun of it in video, and posting funny comments about it.  One posted how hilarious it was because she saw the director of the film Bridesmaids on a national morning news show PLANKING for all to see.  My interest was peaked.

It was particularly interesting to me for the use of at least one of my BLOG’s characters.  They are ALL in fact, characters, deserving of participation in fun and exciting activities, especially those in mainstream pop-culture. So, being the astute and well-read human that I am, I decided to produce this video of my man, M.C. Nugget doing some mean, lean, CHICKEN planking. Here’s what we came up with:

If your browser does not show you the video above, please please please go and watch it (link is also below) – and don’t forget to post comments and subscribe to my youtube channel (you can make it so you don’t get an email every single stinkin’ time I post a video, but subscribe, and you’ll be glad you did)!  You can see the video called Planking: Chicken Planking, on my channel here:  http://www.youtube.com/iammscheevious

But I can’t just end this here.  The reason I mentioned the dates of my research, is because just today I noticed a post on Facebook about Planking.  Here is what it said:

But then I began my own research.  Everything about the ties PLANKING has to slavery on my GOOGLE search, comes up as posted after June 23rd or so (not exact dates, of course, nor the results of an exhaustive search).  My client’s video, other client’s funny posts about the Bridesmaids director, as well as MY OWN Ms. Cheevious Planking Video — all done prior to these posts that showed up on Twitter, blogs and all over the internet starting around June 23 or later…

I even found a blog that had some really great insight about the issue, describing things in very sad and gruesome detail.  But no one seemed to be citing any credible sources.  I wanted someone to cite a history book, or something credible.  I wanted to be sure about it before I decided for myself.

One blog (http://www.courtneyluv.com/planking-is-related-to-slavery/) had an interesting array of comments, but the one that helped me decide, said this:

Everything comes from somewhere so that means every single slang term or fad will now be examined and the negative will be pulled out of it. If thats how you feel then you should get mad at black people when the say they just “hanging”. Dont be so quick to crucify something or someone for having fun. If this wouldve been something a rapper came up with you guys wold be all over it.

I say BRAVO to that poster.  SO TRUE.  I understand if something is your mission, and your aim is to educate people.  But reacting or responding to something so harmless as planking for fun – well it’s a little asinine.  Now, if I were standing over anyone that was not my nationality, REQUIRING them at the threat of DEATH – that they play this stupid game – well now, THAT’S HORRIBLE.  On so many levels.

I have to add here, that I DID conduct a search of Google Books that mentioned Slave and “Planking” in the same context, and I was able to find some reference to the claims.  It was a common practice, apparently – although I didn’t find anything that said it was called “Planking the Slaves”.

So I say lighten up and ENJOY life people.  If it is your goal to educate, well, try to do so without ostracizing the people you are trying to educate.  Good educators find the right approach, making it the most effective.

All I know is I think that what WE KNOW TO BE PLANKING TODAY in 2011 – well, it’s funny. Just be safe, so you don’t die like the Australian dude that fell several stories to his death trying to plank on someone’s balcony railing.  ‘Nuff said.

Have a fun, magnificent weekend people (FIREWORKS! YAY), and ENJOY EVERY STINKIN’ MOMENT!

Register to receive these posts via email!  (link will take you to the Ms. Cheevious Home page. Just enter your email address where it asks for it, then click subscribe. It’s that easy)!