New to Ms. Cheevious-Land?  Don’t be Shy!  Leave a Reply!

So, M.C. Nugget and I attended Improv Olympics in Hollywood last week for Top Story! Weekly. 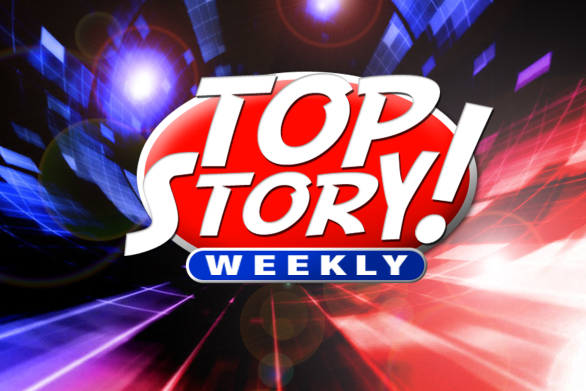 Improv Olympics describes the show as such:

SNL meets The Daily Show in this constantly changing news-driven sketch romp through a week’s worth of headlines. Every Sunday at 9 Top Story! Weekly brings you a brand new 60-minute scripted show, which has been called the most ambitious weekly schedule of any LA theater. Put together by a staff of top writers and actors trained at the country’s best comedy programs, and featuring top names from film and television as guest performers, “Top Story! Weekly” is the most current, up-to-the-minute sketch show in LA.

That all sounds wonderful, and of course, it’s expected for the venue to promote the show.  But I have to say, after sitting through the show, I do concurr.  Yes, you read that right.  I actually agree.  Now don’t fall outta your chairs or anything.

These talented people (the writers, actors, director(s), etc) get together weekly, to write, rehearse and put together a show that offers a collection of the week’s top news stories – with a twist.  This, in addition to their regular day jobs and their undying pursuit of fame and fortune in Hollywood.

One cast member, Matthew Isaac Harris has the whole Obama impersonation thing DOWN! Not only could he pass for the president, but he’s got the voice and mannerisms as well. At first I thought he was just born with a similar voice and it was sheer luck that he found his way into this gig… that the chances of him being versatile as a comedian/actor were slim, but then he pulled off a convincing-enough Chris Brown to impress even me.  Yes, I, Ms. Cheevious, used the word “impress”.  (You know, “Suntines ah lahk to tahk lahk a SMART person, ya git it? …”)

I could go on and on about each of the individual and extremeley talented cast members – like Phillip Wilburn who’s impersonations of Captain Sully and Sean Connery were hysterical… not to mention the fact that in his spare time (when he’s not working full time at a local television station) he does gigs for the Tonight Show, and appears on CNN and more, while still managing to do this Improv Olympics gig.

But apparently it doesn’t stop there.  Another cast member Artemis Pebdani, who graced the audience with her rendition of a newsie/entertainment gossip reporter, among other fun characters, is a busy working actress in her own right.  She’s booked regular appearances as “Artemis” (go figure) on one of my very favorite shows It’s Always Sunny in Philadelphia.  A little bird told me she may even have an affair with Danny DeVito on screen…  big fun.

There are so many talented folks… this post would have to be miles long to describe them all.  I hope to have more time in the audience soon – because we ALL know I love a good laugh.  When Ms. Cheevious is laughing, everyone around her is happy.  Hee hee.

And, by all means, if you’re ever in Hollywood, plan some time to visit Improv Olympics, and certainly on a Sunday night if at all possible – 9 PM PST – for “Top Story! Weekly.” You’ll be glad you did.  It’s wickedly smart and TOO TOO FUNNY!

Tonight I’m off to red carpet for a movie wrap party.  My public awaits – heh heh.  Actually, I have to be not-so-Ms. Cheevious tonight, since I am RUNNING the red carpet.  WOOHOO.

I’ll divulge all next time, I promise!  And YOU!  Well, you just have yourself a fantabulous weekend.  Just be sure to share with the class!