M.C. Nugget and I woke up one Saturday morning to what I initially interpreted as a sweet note from our otherwise nosey, busy-body neighbor. It read something like this,

“Hey guys!  I just wanted to let you know that I am a very light sleeper, so because of this, I sleep mostly in the living room!  Anyway, I will be away at my boyfriend’s through Sunday, so if MC (me — Ms Cheevious) would like to park in my space, that would be fine!”

I should have understood the undertones of this note immediately, but all I saw was the invitation to use her parking spot and I started to do a little dance.

In RE: the parking spot.

You see, Nuggie and I live three blocks from the beach.  This means that on most days parking is a very hot commodity and hard to come by.  I am a busy girl, which means I go places! I have a life! So, I have to search for parking, often many times throughout the day when I come back to our beach place. I USE to park in a somewhat-non-space in back of Nuggie’s building along with the other tenant parking.  It was sort of a half-space, but me and my little car didn’t ever have trouble getting in and out, and no one else ever parked there.  I did this, until “Nosey” dropped hints to Nuggie in her passive aggressive way that “some of the other people in the building were wondering who it was that was parking there, since everyone was only allowed one parking space”… That, in effect, ended my days of using that space in a pinch, and began the days of M.C. and I planning ahead for parking. Oy. As IF we live in New YORK or something!

The comment from her was annoying enough, but when Nuggie read the note he snapped, “Too bad!  We can’t help it if she sleeps in the LIVING ROOM!” and I immediately knew what he was talking about.  Nuggie and I returned the night before from a romantic, fun night out, and wanted to “continue the romance” if-you-will, back at home.  We stayed in the living room for the very reason that the walls in the beach palace are very thin, and well — we don’t want to have to think about waking the neighbors while we have the music on and other “stuff” going on.  So, rather than disturb our sleeping neighborsj (as the bedrooms in these places all have common walls), we took our hanky-panky to the living room.

Suddenly, I found myself cracking up.  ‘Serves her right!’ I thought.

If you’ve ever lived in an apartment complex, or even a tightly knit neighborhood of homes, you’ve known neighbors who don’t know how to mind their own business.  Oh, sure, they justify their nosiness by saying they just “care” about you and your well-being, while they make sure you know they see and hear everything you do.  It reminds me of Mrs. Kravitz from the TV Show Bewitched.  If you’re too young to have ever seen Mrs. Kravitz (I can’t imaging why you would be, since the show is still all over cable TV today), I’ve provided a few shots of her below: 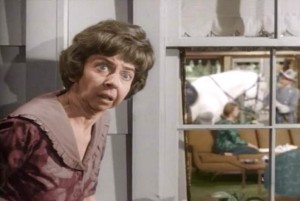 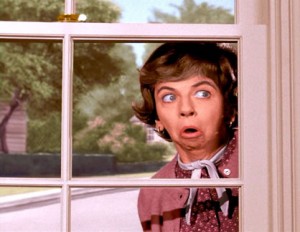 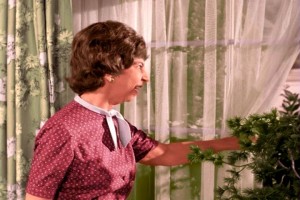 Funny.  Some people just don’t have a life.

Stay tuned everyone – as next I’ll be sending you my REAL, and TRUE Costa Rican Vacation video!  Yippee!

Have a great day and make someone smile because you are MINDING YOUR OWN BUSINESS!

One Response to "Introducing “Nosey” Next Door Neighbor"