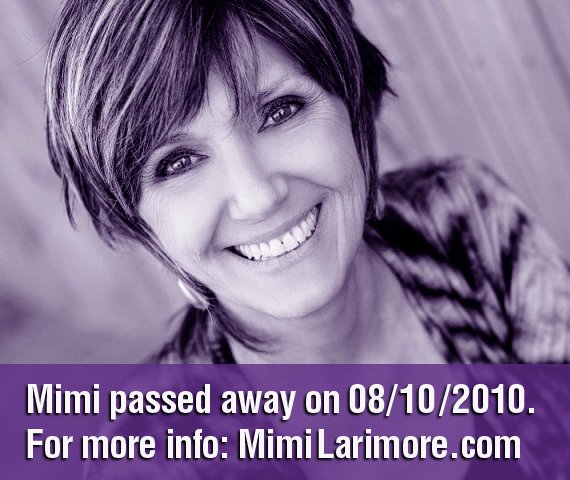 “Life should not be a journey to the grave with the intention of arriving safely in a pretty and well-preserved body but rather to skid in broadside, thoroughly used up, totally worn out and loudly proclaiming, ‘Wow. What a ride!’ ”

She quoted this in her journal/article (book?) called  My Fantastic, Final Journey, about her final time on earth battling cancer. That saying became Barbara’s “slogan” until the day she died in 2005.

And that “slogan” epitomizes my sister, Mary Louise “Mimi” Sherwood Larimore (a.k.a. Maven here in Ms. Cheevious-land) who passed away on Tuesday, August 10, 2010, after almost 7 years battling Ovarian Cancer.  She absolutely, unequivocally LOVED life – with every ounce of energy she had. And she LIVED her life to the fullest – even when the cancer was at its worst.

Another sister, Blu and I were talking about it, just after Maven died, and Blu choked out, behind the tears, “And… she  had such a wonderful husband!!  He would have followed her to the ends of the earth!!”  I tearfully agreed, and as I pictured the happy couple that they were, I added, “Actually, she would have followed him too… that’s just how they were”  We both agreed.  What a rare thing to find these days.

So – I’m going to tell you a story that sprung from this. Believe me – I mulled over how to tell it – or whether to tell it at all.  But when I thought about my sister – who was my biggest fan and supporter… who planned to send messages about me to Oprah Winfrey every single day of her life, because she thought I should be one of the authors in Oprah’s book club…  just as soon as she felt better – well, for THAT sister, and because I knew Mimi would get such a laugh and a kick out of it – I decided this story had to be told.

It was in that moment, talking with Blu, that I also thought about just how lucky I, MYSELF, am.  I thought about how my man, M.C. Nugget would do anything for me.  He’s just that type of guy who comes from good stock… his mama brought him up right. He is loving, loyal and a true friend – to men and women alike.  If he knows of hard times in a friend’s life, and can do something about it – he does. It’s that simple.

So, in that moment I thought… ‘hmmm… that’s kinda how Nuggie and I are…’

Over the next day or so,  that very thought is what brought a smile to my face more than once – even in my pain. I felt so very lucky – and felt that Nuggie was pretty lucky too.

I laughed and added, “Yeah, and I might STALK you to the ends of the earth, if you’re not careful!”

He continued with the pièce de résistance, “Is there a BAR at the end of the earth? I’d follow you if there’s a bar!”

I laughed and said, “Ya’ gotta figure, anywhere I go, you can count on there being a bar, honey!”

“Well, if not, at least I would be able to SEE you from the BAR closest to the end of the earth.”

We laughed a lot from that, because that’s who we are.  We love to laugh.

And that was Maven and her hubby! They laughed, and joked, and enjoyed life.  Every ounce of it.  She CERTAINLY skidded to her death sideways, her body worn and tattered… but DEFINITELY able to say “WOW… What a ride!”

Her love for life and her spirit lives on in everyone she knew and touched.  Everyone who was privileged to joke and laugh with her… to dance with her at a party – when she would make fun of herself and try to look like a 60’s go-go dancer, or when she would razz people and get a chuckle out of it…. or talk baby talk and whine to get her way… then chuckle about it.  Anyone who knew her generosity, thoughtfulness and deep love and devotion for her close friends and family – well, they were all blessed tremendously.  We all knew it was just who Mimi was… warm, accepting… fun… and infectious.  And we all wanted to be a part of it.

I hope to live life as full and as vibrant as Maven did.  I vow not to let things slide or put important things off for another day —  I promise to LIVE as if every moment is my last — and to make SURE everyone in my world knows that I love them.  I am determined to go after my own personal “bucket list” and not put it off for the last chapter in life.  I don’t know when that last chapter is, and I’m not taking any chances. You live on forever in my thoughts and in my heart, and in the thousands of things that remind me of you, Mimi. It hurts my heart deeply and sharply to even say that.  I still don’t truly believe you are gone.  You were and are an inspiration.

a.k.a. Your baby sister, Lisa