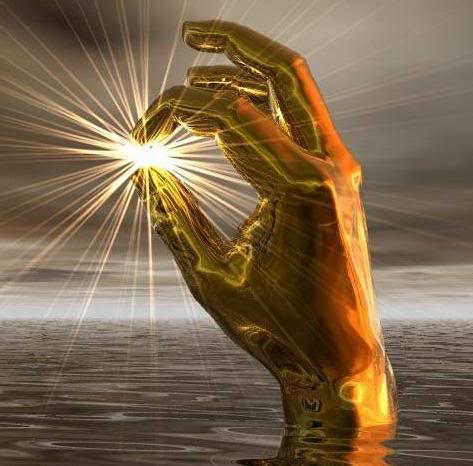 I’VE GOT THE MIDAS “TWOUCH”

I haven’t said anything about this yet, but I have the Midas Touch on Twitter… I’m calling it the Midas Twouch, actually. (you can tweet that here).

If you don’t “Tweet” you may change your mind in a minute.

Here are some verifiable examples of how I’ve tweeted things into existence. It’s like MAGIC. I’m not even TRYING to get things, and yet they keep showing up at my door.

About a year ago I received a delectable box of chocolates in the mail from Sucre Chocolates in New Orleans after I’d been tweeting about how much I love chocolate. No surprise there. I made a video about that yummy box of chocolates and how it made me dance like Elaine from Seinfeld here, Below is a sampling of my tweets about chocolate, culminating in said “box” being sent to me: 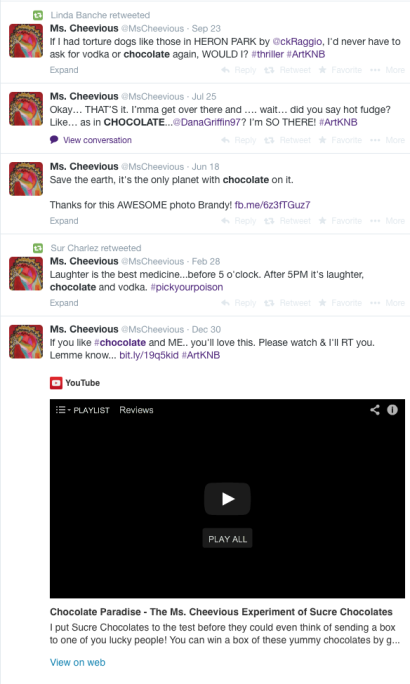 I’m constantly tweeting that Vodka is my first choice in alcohol. Because of this, I received some vodka infused, yummy, healthy VitaFrute in two flavors, which made for some excellent, refreshing cocktails for a few months.

I’ll be trying this yummy VitaFrute by @VeeV… because *of course* they want my OPINION. Pffff.. #abetterwaytodrink http://t.co/OeWArWFBIx

Here’s the tweet image in case you can’t see it above:

The amount of time I spend online is asinine and I should be committed. It had gotten so ridiculous, I remember about six months ago saying out loud something like “When is all of this FREAKING HARD WORK going to pay off for REAL?”

That’s because tweeting, posting to Facebook and Instagram (for three accounts each, me the Author, me the Health Nut and for Ms. Cheevious), youtube, blogs, etc. etc... is a TON of work. I spend most of the hours in my day in front of a computer, tablet or smart phone communicating to people in a virtual world.

CASE IN POINT FOUR: MY FACE

I ran out of my favorite face products near the end of last year (December). I was tweeting about this, and how I needed some new products, stat. Shortly afterward, Dr. Garo Kassabian at Lift MD Aesthetics hooked me up with a huge free kit, and a diamond facial! It was awesome. They also gave the same thing to one of you lovely people.

I tweeted this, rather non-chalantly afterward.

I was *just* talking about face products & a whole bunch showed up! So how’s this: #NEWCAR pic.twitter.com/CO3HUFb6jb

Here is the image, in case the above tweet isn’t displaying properly:

So, I had just asked “When is this going to pay off for real?” And I had just tweeted #NewCar, when my answer came. I received an email from Klout (another online platform both Ms. Cheevious and me are on, which measures your online influence), letting me know I’d won their Perk contest from Chrysler. The prize? A free two year lease of a new car.  I called Klout headquarters to make sure it wasn’t a scam. It was real.

A TWIST IN THE “TWOUCH”

As Peter Parker’s uncle said “With great power comes great responsibility.” Something I hadn’t accounted for, was the power of my joking tweets. I can’t seem to track it down, but somewhere along the way I tweeted about winning a big prize, and how it was too bad it wasn’t a bundle of money.

Two weeks later, Chrysler called and asked if I would like to have a cash prize instead.

IT’S ALL IN THE GREENBACKS BABY

Here is the proof on Instagram (snapshot also below):

I’ve also tried to tweet a television series into existence for M.C. Nugget, but instead was approached by a casting director myself for a network TV show. I’m still fine-tuning that one.

So, I’ll just be over here, tweeting about my best-selling book and Nuggie’s three picture deal.

In the meantime, I’m taking tweet requests in the comments on this post. No promises or guarantees.

#MomFactor: You’ve tried everything to get the kids to eat spinach? If all else fails, TWEET mama! TWEET!