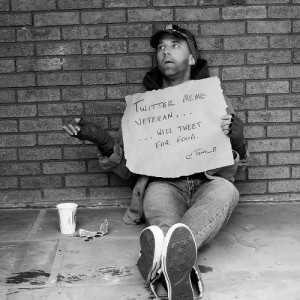 Desperate times call for desperate measures.  What an understatement.

Do you know how many formerly highly successful people I know who are currently struggling financially, out of work and wondering where their next meal is coming from? Let’s not even talk about paying the homeowner’s insurance, health insurance or credit cards. We’re talking about surviving – at its base level.

I’ve got friends and acquaintences who have been looking for any sort of work for months — even YEARS!  Can you believe this?  Believe it.

Trust me – I do not say these things lightly.  I don’t like to put the spotlight on negativity.  We all know (any of my readers know, that is), that I am NOT one to “cave” or “bandwagon” it because of what people say or how they choose to act.   I believe we create the drama or at the very least, fan the flames of depression (or lack of affluence, success, employment, moolah) oftentimes by merely giving credence to it (the lack of jobs, money, success, etc. that seems to be out there).  I still hold firm to the belief that we create the lives we live.  We can be as successful as we truly desire — IF — we go for it fearlessly.

BUT (oh yeah – there is a BIG BUT here) – when everyone you know has at least one friend (more than likely several friends) out of work, and struggling to make ends meet, you have got to pay attention PEOPLE!

I will not be one to turn a blind eye and pretend nothing is happening – that we do not have a problem .  And neither should you.

I know I won’t.  Nope.  Not when that problem is not only staring me in the face, but it barged in my front door last October, and has now made itself at home, shacking up on my living room sofa, and using up all of my toothpaste.

And not when unemployment rates are skyrocketing, soup kitchens can’t keep enough food, or feed enough people, and recycled clothing shops have stopped buying shoes and clothes because they have too many people trying to sell their wears.

A GOOD job!  The kind people could marvel at!

But seemingly, not so these days.  I can’t tell you the countless numbers (hundreds for sure) of highly educated (chock-full-a-“social media experience,” “internet savvy,” “management level”) friends and passers-by in my life who’ve been looking for work in their respective fields, but have resorted to applying for ANY sort of job (receptionist, restaurant hostess, retail clerk) – – STILL to no avail. They’re competing against thousands of equally over-qualified individuals, and can’t seem to “stand out” above the rest for that $12/hour (plus tips) job.

Over the next couple of weeks (or as long as my creativity lasts) I am going to hit the pavement – literally.  I am going to use any and all methods I can “employ” to obtain solid offers for a GOOD job, and I will NOT settle for anything less than what I deserve (we’re talking big bucks here people).

I’ve got some good ideas, but feel free to offer your suggestions.  It’s going to be a wild ride folks!  The gloves are off!  I’ve got my camera in hand.  Watch out moguls!  I’m coming for you!  I’ll show YOU who stands out above the rest.