No, I’m sorry.  This is not about the dark and try-as-it may-to-be sinister television series. It’s about the film from 1992. It was suppose to usher in the dawn of the feminist horror queen heroines. No scream queens in this film.  But instead it was campy and hilarious, and was reviewed poorly… written off by film reviewers.

Then a little thing like a cult following made a television network like the CW stand up and take notice. They repurposed the storyline for a six year run on primetime television. Only, the television version didn’t come close to what fans of the film had fallen in love with:  the hot, somewhat ditzy valley girl (Kristy Swanson) meets somewhat hot and quirky love interest (Luke Perry), two very likable, ill-intending, yet clumsy vampires (Rutger Hauer & Paul Reubens aka Peewee Herman), and a wise old Vampire-Slayer guide (Donald Sutherland).

Since one of those “other” blog sites (Hello Giggles) out there posted “Five Ways Buffy the Vampire Slayer Ruined My Life” about the television show, I decided someone had to talk about how this film impacted modern-day pathos…certainly my own. 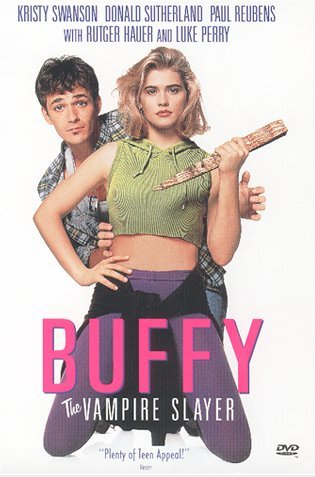 The MOVIE “Buffy The Vampire Slayer” rocked my world, because it came at a time when I was a young mother who was newly married. My life had become very proper, and tame. I was introduced to these SNARKY, HILARIOUS, COOL phrases that made up most of the film, and I was in awe. I had always been one of the girls in my circle who wise-cracked and made silly-as-hell jokes about everything, but now, just as Buffy was always ready and always witty, so too I would always be ready with a quick-witted response. I knew that my wit could some day change the world – and definitely save my life.  I was right, of course. Here are just a few of the ways the film and it’s awesome lines ROCKED my world:

Heyyyy… maybe I’m not only “like” Buffy. Maybe I AM a Slayer after all.

But really, the list of comedic retorts and phrases goes on and on!  There are so many great lines in that movie.  It definitely ROCKED my world.

That’s it for now my lovelies!  I’m off to beddy-by, where I can dream about slaying the world with my cool-ass wit.

But before I go… one of the readers of my post “10 Things Guys Secretly Wish About Women” asked me to do a similar post about what Women Secretly Wish About Men. I’m toying with the idea.  But in the meantime, for your reading enjoyment, you can find many of the funny lines from the “Buffy The Vampire Slayer” film here: http://en.wikiquote.org/wiki/Buffy_the_Vampire_Slayer_(film).

See you next time everyone!