It happened to me a while back during one of those expensive lunches. You know the kind… where I pay for lunch because I want to represent you (as your publicist), the fabulous Movie or TV star that you are?

Anyhow, a friend set this lunch up because she knew the guy (who is a regular cast member of a fairly popular TV show). I knew only a few things about my girlfriend – as we were fairly new friends – 1) She is an aspiring actress, singer/vocalist, 2) she had been a model, 3) she is an AA member… and a few other details…  but that was it. Because she was an aspiring actress, singer, and general entertainment fiend, for all I knew, she knew this guy because of the industry circles they both ran in.

So, I’m sitting there, giving my schpeel, when the guy comes out and says, “Are you a friend of Bill, Lisa?” To which, I looked at my girlfriend and said, “Which Bill? Do I know Bill?” At that, the two of them exchanged knowing little glances (*whatever*) until my friend FINALLY said, “It’s a question we ask that let’s us know if you are in AA.” 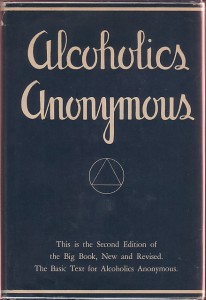 In that moment, I graciously laughed and muttered something about being married to someone once who was Bill’s friend.

Even though this particular incident happened a while back, when I remembered it the other day, I was a little miffed by it all over again! So, guess what?  It goes in the blog.

Forgive me if I sound harsh or angry… because, well this kind of thing upsets me (right up there with how suddenly it is virtually impossible to get good customer service here in America.  We invented it, yet now somehow “IT” is nowhere to be found). It’s not earth shattering – my miffed-ness at this incident.  It’s simply general miffed-ness that makes me want to get in someone’s face about it.  So I figure we are safe here on my turf.

No. This is not an AA post. I am not a recovering alcoholic, though I do love to get my booze on, and some out there might wonder. And I am not at ALL  dissing people who belong to AA and are in recovery.  In fact, I applaud the AA organization and all those who make healthy choices, one day at a time. No. This post is about that little question…

First of all, what IS that question about? It’s like SABOTAGE to pose a question like that, and then exchange “knowing” glances. WTF? In ANY situation it would be considered rude, but when I am buying lunch and it’s obvious I am doing so to obtain business – – well it’s just criminal.  Sometimes I just get such a flash of anger in instances like these, I like to daydream about reaching over the table and choking the duck confit I just bought right outta the offender.  Ahhh… just typing that made me feel all warm and fuzzy inside.

And, aren’t the prime ingredients for true recovery (aside from abstaining from controlled substances) to be honest, transparent and forthright? Yes they are, boys and girls. And trust me I am an authority – after being married to a recovering alcoholic who led the drug and alcohol group at church, and who subsequently fell HARD off the wagon and managed to help demolish our family in the process. Yes, I know a little something about the tenets of Alcoholics Anonymous. But apparently, that little tidbit escaped me, even after 14 years of marriage to one of its members.

But in terms of that little question — why the secret “handshake” so-to-speak? And why did they think it was acceptable at a professional lunch meeting? I didn’t know this guy. I had never even heard my girlfriend (or ex husband, for that matter) use the phrase. Didn’t their mama’s teach them ANYTHING about basic manners?

Listen, I GET the whole club or support group deal. I’ve been there for various reasons at different times in my life – mostly for support during a “bumpy” marriage, way back when – but we didn’t give a secret code to our group or cause. Perhaps we needed one — some butt-ugly name like Malificent or something. Then we too could have been proud members of the jilted housewives club and not been ashamed! AND the members could have gone around saying something “housewife-y” and with a British accent, like “So, Susie… have you had tea with Malificent?” appropriately exchanging “glances” when someone looked confused or uncertain. Wouldn’t that have been nice?

You get the point.  MEAN, people. Just MEAN.

But that’s why I am here — to buffer you from the clique-sters who would make you feel stupid!  Now if you have learned anything from Ms. Cheevious while reading this post, what do you say if you’re ever asked, “Are you a friend of Bill?”

If you are not a member of A.A., you promptly and loudly reply, “Oh no. I know who he is, but I can’t stand the fat bastard.” (Not that “Bill” truly IS a fat bastard… but the question is so preposterous, I think it’s warranted!)

If you are a member, I implore you to say, “Why don’t you just ask me if I belong to AA?” and see what they say.

So there you have it people! Have a scrumptious week of tea and crumpets with Malificent – or Bill – or whomever you choose!

PS) Please keep your wits about you my lovelies. If you do struggle with alcohol abuse, this is no laughing matter. Get some help, visit AA or investigate checking into a long term alcohol rehab program.