Hello you lovely, gorgeous people out there!  Welcome to the land of all-things-Ms.Cheevious.  Okay – maybe not so much this week.  This week I’m finishing up a two part series dedicated to and in honor of my lovely, wonderful, incredibly warm and caring mother – Nereide Francesca Padalino Sherwood – who passed away early, December 3, 2009.

If you are new here – well, gee – thanks for stopping in. I hope you enjoy yourself, though I must admit – this post is not characteristic of my usual posts.  But now that you are here – read it – and learn something, would ya? 🙂  And… uhm… you may want to come back again if you’re looking for the sexy, fun, flirty antics of Ms. Cheevious.  Because this won’t be that — and I’m happy to say so.

The story below, originally entitled, “Miracle on 44th Street” was written and picked up by internet magazine The New York Review (now defunct due to the sluggish economy).  It was taken from my mother’s dictated life story, and written in story form.

Of all the stories of her life, this is one of my favorites.  It captures the magical life my mother led. It was that type of life she taught us to live for.

I walked down Maiden Lane on my way home from work and headed toward the subway. It was a beautiful summer day in June, 1942. I loved the feeling of the warm sun on my face as I walked. Was it only because I was able to leave work early that day that I noticed the grand weather we were having? It was only a temporary job. I was so sure when I took it, that I would find something else before the two weeks were up, but now it was over, and I was painfully unemployed. How on earth would I help support my mother?

As the subway neared Time Square, I decided to get off. There was no need to rush home to the Bronx, and cranky old Aunt Lib just yet. Besides, I loved Time Square. It reminded me of everything I wanted: the glitz and glamour of life as an actress on Broadway.

Walking by the Astor Hotel on Broadway, I picked up a copy of Actor’s Equity, a theatre trade magazine, which told of rehearsals and upcoming auditions. I noticed that a talent agency was auditioning for some plays on the 7th floor of the Sardy building on 44th street, across from the Shubert Theatre, so I went to check it out. I quickly learned that all the auditions were for summer stock up in the Catskills, and my heart sank. I couldn’t go up to the Catskills, work for free, and support my mother at the same time!

I got in the elevator to go down, and at the 5th floor, everyone from the audition got out. I thought I’d better get out and see what was happening! I followed everyone past a secretary into a huge waiting room. We waited, and waited. After sitting there for two and a half hours, I finally got the nerve to ask an old gentlemen next to me, “Pardon me, but who are we waiting for?”

After a few more minutes, I replied, “Is anybody going to see him?”

He said, “You’re new. Why don’t you go see the secretary and see if you can see Mr. JJ?”

I didn’t know who Mr. JJ was, but I figured he would be a good person to start with. I went over to the secretary, and asked her about it. She took my name “Nereide Padalino,” and disappeared.

Ten minutes later she called my name and took me down a maze of passageways – lined with movie and theatre star photos. She led me into an impressive office with windows overlooking 44th Street. “Mr. JJ” was none other than JJ Shubert, and was sitting at his desk in his shirt sleeves. He stood up immediately and apologized, explaining that he tore his jacket on a nail and sent it down to the tailor to be fixed (in those days it was impolite to be in the presence of ladies without wearing your suit coat).

“Well, Miss Pah-dah-lino,” he attempted, “What can I do for you?” He smiled nicely.

“Well that’s just it, Mr. JJ. I sure hope you can do something for me! I have to get a job to help my mother, but I want to get into show business!” I blurted.

“Well,” he asked, contemplating, “What can you do?”

I eagerly offered, “I had the lead in the high school play, and I sing in the church choir.” Talk about an inexperienced, ingénue, country girl!

He was sweet, nonetheless, as he said, “Come with me.”

He stood up, took my hand, and led me down the hall to “Simpson’s” room, where old Simpson was sitting at a big grand piano. The big boss Mr. Shubert, told this schnook, who kept all those people waiting in the other room, “Simpson, play a few notes for the young lady.”

Simpson played a few notes, and I did some trills for him, “Tra la la la.” Mr. JJ said, “That’s just fine.”

He took my hand again and led me back to his office. We sat down and he looked at me and said “Let me see what I can do for you. Why don’t you give me your phone number and I will call you in a couple of days if I can find something.” And that was it!

I went home to Aunt Lib’s house. It was already after 6pm and she was furious!

“Young lady! Do you realize what time it is!? Where have you been!?” she screamed.

“Come off it!” she retorted, “You’re in New York now! Who do you think you are, you hillbilly? Somebody just told you he was JJ Shubert! There are a lot of con artists out there now!”

“I swear! It was Mr. JJ!” I defended. I relayed the whole story about his office and where it was located. So, she called her best friend Eva. Eva had a niece who was one of the famous Rockettes.

She hung up the phone and huffed, “Eva said there is no way on earth you got in to see Mr. Shubert. Her niece said he is the hardest man in show business to get to see!”

“Well, he told me he’s going to call me in a couple of days. He’s going to see if he can find me a job.” I responded.

“We’ll see about that! You gotta be careful who you talk to!” She snapped.

After a couple of days, and no phone call, I went down to see Mr. JJ again.

“You know Nereide,” he said kindly, “This being June, there are no shows opening at all in the summer, except the summer stock in the mountains.”

“Well, I can’t wait. I have to get a job now. I have to help support my mother.” I pleaded.

“Well Nereide, what else can you do?” he asked hopefully.

“I took short-hand and typing in school. I can do some secretarial work,” I said enthusiastically.

He called his secretary in. “Give this young girl a pad and a pencil,” he said. “Take this down,” he said in his dictation voice. He proceeded to dictate a very short letter of about three sentences. I was so nervous, I had to memorize it! I couldn’t even write.

“Okay. There’s a typewriter out there. Type it up and bring it to me,” he said in a mock-authoritative voice.

I went out and typed it. Would you believe I made three errors on it? I took it into him. He didn’t say a word, he was so kind.

He asked, “How much were you making at your last job?” I only made eighteen dollars a week, but I lied and told him twenty. “Alright” he said, “You can start working here.”

I should have been thrilled, but I was relentless. I reminded him “But, I want to get in show business.”

“Well, nothing starts rehearsing until September. So, until then you can work here in the office,” he answered me, closing the deal.

I settled quickly into my new job. I was responsible for typing the re-writes for the man who revised the operettas into modern language for the librettos. JJ was always sweet and very polite. He was like a father to me.

As time passed and summer was coming to a close, I asked, “Mr. JJ, when are they starting rehearsals? I am doing all the scores for these plays and things.”

He asked “What do you want to do? You want to go with the cast of The Student Prince, Blossom Time, The Merry Widow or Gilbert and Sullivan?”I was so green, I said, “Well, who are Gilbert & Sullivan?”

He said, “It’s a repertory company. They do about eight to twelve plays.”

I thought for a second and replied, “That sounds interesting, because then you wouldn’t be bored with the same thing every night! I think that sounds like the one I want to do.”

He smiled, and asked, “Are you sure my dear? It’s a very hard life in show business.”

It was settled. Mr. JJ sent me to Murray Korman Photography Studio to get some professional photographs taken. He even had Murrary Korman send him the bill. I said goodbye, and I never saw Mr. JJ again. 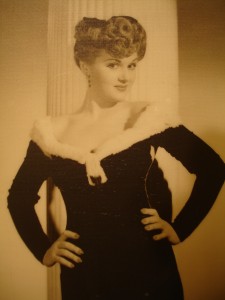 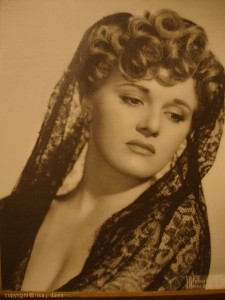 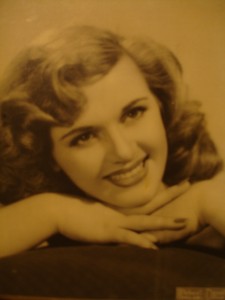 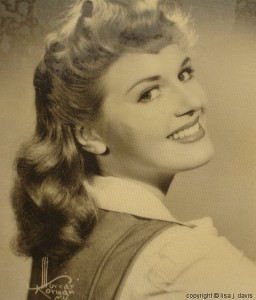 I walked right into the chorus line of the Gilbert and Sullivan Repertory Company. I never even had to audition. My friends in the chorus later told me “We heard there was going to be an office stooly coming in.”

They soon learned I wasn’t. I was so thrilled to be a part of it all and to live my dream. I worked very hard, and loved every moment.

Yes, my mom was all about enjoying life, and it was infectious.  It’s where I get my motto – Enjoy Every Moment.

The Albuquerque Journal saw this about her, and chose to write about her life and death.  If you’d like to read that article, you can go here (http://www.allbusiness.com/society-social-assistance-lifestyle/religion-spirituality/13540597-1.html).

Before I go, I’ve posted some of the video clips from my mother’s funeral service.  The first is a song our brother Jim sang for a part of the mass – during which all of my mom’s grand-children who were present and old enough, brought the communion implements to the priest.

Next is the video of my sisters and I singing the “Holy, Holy, Holy” portion of the mass.  If you’re Catholic, you’ll know what that is.  If not, you may recognize the song anyway.  It was an honor for us to do this for her:

So there you have it!  My two-part hommage to the woman who shaped and molded me throughout my childhood and into adulthood. Neither she nor I had anyway of knowing the magnitude with which her words, actions, love and tenderness would impact my life, and the lives of everyone I know.  She is largely responsible for much of who I am today, and I am eternally grateful.  Here’s to you Mom!  I love you.

And with that – I leave you to have a fantastic weekend.  Enjoy your friends, family, work, play — whatever you have near you and at your finger tips!

Next week I promise to get back to my Ms. Cheevious ways and tell you all about the mischief in Hollywood.