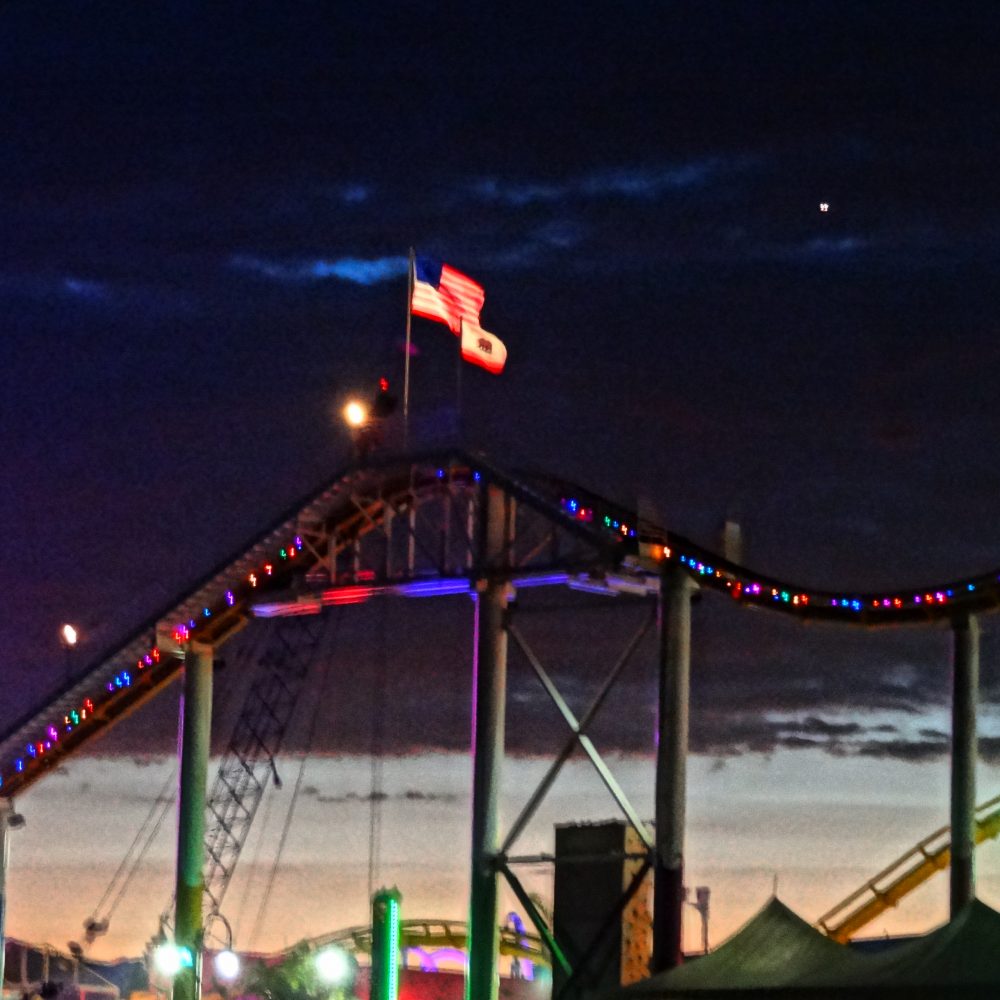 American Flag, on a roller coaster AT THE BEACH. All you need is apple pie.

I’m in Vegas with my soon-to-be teenage son (does that make him still a tween, or just simply hormonal?), Graden.  If you are new to Ms. Cheevious – Enjoying Every Moment, welcome!  We have loads of fun in here.  I tell it like it is, based on how I see things, of course.  Anyhow, I change the names of my friends and family, whenever they get entangled in a predicament I feel compelled to share.  So, Graden is not really my son’s name, but it’s cool isn’t it?  My son’s pretty cool.  I must admit.  Both of them are.  Graden and Joel (another cool, also not-my-son sort of name).

As many of you know, Graden and I were in Aspen last week, where I got very sick and was laid up most of my visit.  I was there on business, and upon arrival soon found myself about the business of lying in bed trying to recuperate.

When I planned the trip a couple of months back, I’d mentioned it in passing to Graden, thinking we’d be driving from Los Angeles to Colorado.  To sweeten the deal I said we’d probably stop in Vegas on the way there or back to break things up.  Graden is a cool twelve year old.  In “parent language” (in case you’ve not been blessed with little darling children) this means he doesn’t crack a smile or show any emotion.  At least not to me.  I’m his mom, dude. That wouldn’t be cool.  Hello???  So, when he half-way squeaked a quasi-exuberant huff, something to the effect of “Oh! Snap! That’s coooool,” I knew I’d better not re-neg on this one.  He went on to explain that the roller coaster at New York, New York was on his list of “must rides.”  I quickly realized that the little boy who, on a trip to Knott’s Berry Farm a couple years back, wouldn’t board anything that looked remotely fast or furious, was gone. Sniff, sniff.

You’ll get a laugh, (either that or be extremely bored) over our little excursion.  Our story is replete with after-midnight tales, and scurrying about the strip. But it’s not the usual story, as most trips we’ve all heard about that are chock full of juicy, sordid details of love lost (and found – well, a tainted version of it, anyway), money won (and lost). and all manner of legal and illegal substances consumed (or, ehem, “tossed” – as in “I tossed my cookies”), for better or for worse.

So here we are!  We arrived at about 7 pm last night, got the rental car and checked into the hotel (NY NY).  It was 9 pm before we were able to head over to a little restaurant called Mon Ami Gabi in the Paris Las Vegas hotel.  It came highly recommended by a friend who frequents Vegas, who said “Sit outside on the patio.  You’ll love the view.” We did, and – we did!  Graden said, “Tell Thurston (another fictional name) I love him!”  THAT, my friends, was a very important clue.  For Graden to say that, I’d DEFINITELY broken through the hard, cold exterior of his coolness.  I was on the fast track to becoming the essence of cool in the eyes of my son, which, at the age of almost thirteen, is INCREDIBLE.

Here I caught Graden in a “moment” where it wouldn’t be too bad to take a picture with mom.

Mon Ami Gabi’s patio sits directly opposite the Bellagio Hotel’s famous fountain, and every fifteen minutes, on the dot, we were treated to a beautifully choreographed fountain routine.  There were routines perfomed to songs by the likes of Celine Dion, Frank Sinatra, even Charro.  And those sexy legs!  Well, anyway.  It actually was very beautiful.  But the really fantastic thing about the restaurant was the food.  That was what prompted Graden to say that he LOVED my friend.  He drooled as he savored every bite of his filet mignon.  What twelve year old wouldn’t, I suppose!?

Here is basically the same photo, but this time, you can see the FOUNTAIN!!

But I must admit, as beautiful as the fountain was, it was what happened next that was really hilarious (or very sad, depending on your opinion, I guess).

Okay – one more picture of the fountain, just for good measure:

We left the restaurant and ran as fast as we could back to the hotel to try and catch a ride on New York, New York’s roller coaster, the Manhattan Express (I’m not sure that’s still the name, but it works for me).

Normal hemming and hawing, making excuses as to why the ride could wait until tomorrow, complaining about the traffic (pedestrian as well as auto), or any other stalling mechanism I could think of to enlist aside – I went on the ride.  I have to say, something interesting happened.  It was as if my inner teenager was awakened.  I had a BLAST on that roller coaster!  I would have run back to the front of the line again, were it not for our getting on board the last ride of the night.

Graden and I got back to the room after midnight and pulled up whatever websites we could find to plan our coaster strategy for the next day.  We were up until TWO AM scheming our screams for the day ahead.  Silly me even thought I’d get up early and get a work out in.  Yeah right.

We ended up riding the roller coaster at Circus Circus, the Sahara (pictured above, at the NASCAR cafe), and one other that escapes me now.  They were ALL fantastic.  We rode them multiple times.  By the time we got back to the hotel, I was in need of a massage.  I got one.  It was fabulous.  Graden used his free time to buy a Manhattan Express wrist band and ride the coaster at our hotel over and over again.

We are off to see “O” by Cirque du Soleil tonight, then it’s the Stratosphere coaster and swimming at Mandalay Bay tomorrow.  My, we are awfully hip, aren’t we?

I have to run now people.  Places to go, people (or at least characters in costumes and what-not) to see!

I hope your weekend brings you multiple smiles and something good to remember.

Register to receive these posts by email by Clicking Here