When the good people at Hot or Not asked me to take a look at their app, I was intrigued. I’ve been around long enough to remember the days when the Hot or Not website first launched. Oh, the uproar it caused among civilized citizens (among whom I did not belong). I was married at the time and really couldn’t be bothered, but meh… I thought it was a funny idea, even if Bill O’Reilly thought otherwise.

My review of the app itself is below (for you impatient types). I offer some hearty, useful advice for the people who think they’re “hot” but obviously dozed off during “SELFIES 101…”

…but first I think I’ll pontificate:

It is now 2014, and these people decided it was time to up their game. I mean… it’s now an interactive app for IOS* and Android* for goddsakes.

Because I am currently miffed at Apple and refuse to upgrade to IOS 7 on my iPhone, I couldn’t use the app there (first issue). Good thing Nuggie got an Android tablet for Christmas.

In a matter of moments I was signed into Facebook, had the app on the device and logged into the Hot or Not world.

I suppose I should be up to snuff on these dating apps via osmosis. I have a few friends who play around on Tinder, OK Cupid, Match.com etc… But you guys, this has exploded in the five years since Nuggie and I started chasing each other around the living room!

To channel my inner senior citizen here, back in my day, we actually had to be intelligent writers (okay, maybe not) who could build a stellar online dating profile to go anywhere in the Match.com or J-Date communities. We searched the archives of our computers for photos that made us look AWESOME and we perused and poked or prodded others who looked appealing. My girls and I use to join the sites as “free” members. That meant you couldn’t contact anyone. The incessant poking or grinning (or whatever) could continue ad nauseum, but no actual email contact was allowed without a paid membership. We waited until someone who seemed worthy of the twenty bucks made contact, and then we paid our fee for some dating what-what. That’s just how it worked.

Now, you get a FREE APP, you log in, you give the app permission to a) post whatever the hell it wants to your Facebook profile, b) to spend your money, c) read your private diary and d) to claim your first born; Then, voila! You’re up and running! [joking about the money and diary of course]

Here are those hearty and useful tips and things to note as promised, and herein lies my review (my rating is further below):

1. If you have any “photos of you” on Facebook that are not, in fact you, do not use Facebook to login to Hot or Not!  Otherwise one of your profile photos that will come up on Hot or Not may be your dearly departed mother. Even though she’s a hottie, and may garner you more votes, just don’t. 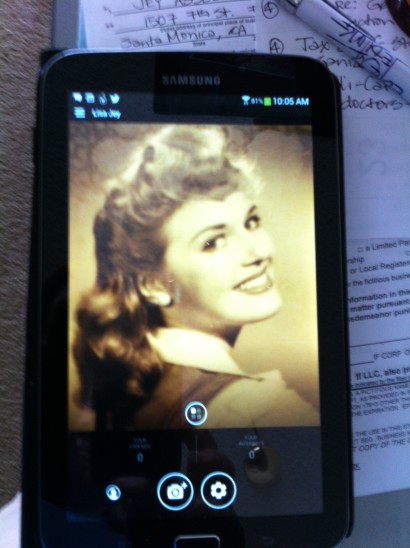 2. This useful tip is for the app makers. Below is the menu for the app. Ignore the icons along the top (those are icons showing what’s open on the tablet itself). The main thing that’s missing from below is an APP SETTINGS or APP ABOUT section. If I’m going to use an app, I want to know where it’s going to share the information I post or respond to. I also want options to turn some of that shit OFF. I want to know what happens when I “heart” or click when I think someone is “hot.” Does it send them a message? Does it just add to their “score?” These are important things to know. But let’s dissect what the menu DOES

a) LISA JEY – if clicked takes you to the images of you that others will see (as in above image). You can go to deeper levels to see and edit your language and about settings.

b) HOT OR NOT – this is where you peruse peeps and click the HOT OR NOT option based on the various pics that show up for them.

c) CONNECTIONS – I’m not sure how this works, but if you click on this as a newbie, it says “The more you play Hot or Not, the more connections you’ll have!”  I’ve been playing all morning, and I don’t have any yet. PFFF…

d) SCORE – my Score page says my score is not ready yet. It says if I rate other people, I will get rated back. DOES THAT MEAN EVERY GUY I RATE AS “NOT” CAN RATE ME BACK? If that is the case, guess what? NO INTELLIGENT HUMAN WILL USE THIS APP WITH A REAL IDENTITY. Note – I said intelligent.

3) While perusing profiles to either “heart” or to X out of my world for eternity, I stumbled upon a couple of chicks in the mix. While I appreciate the beauty of women, I was not sure how to react to these photos. Do the Hot or Not gods want me to be friends with girls, so they’re showing me some to rate? What happens if I X them out? More importantly, what happens if I “heart” them? Will they think I’m a lesbo?  These are REAL questions by REAL people. Me.

In an effort to be forthright since I am not a lesbian, I clicked “X.” Didn’t want to send the girls the wrong message (the fact I’m doing a review and not really looking to meet anyone on this app, notwithstanding). 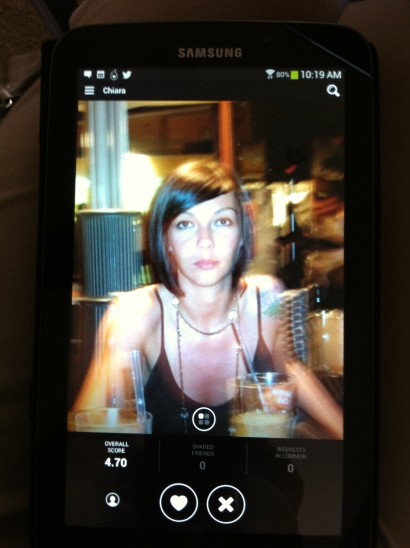 4) I found a very large percentage of the guys on the app to be YOUNG… like 18-20ish. I suppose it’s to be expected, but I couldn’t go there. I have friends who have and would, but NOT ME. I like a MAN with some good EXPERIENCE under his belt (no pun intended). 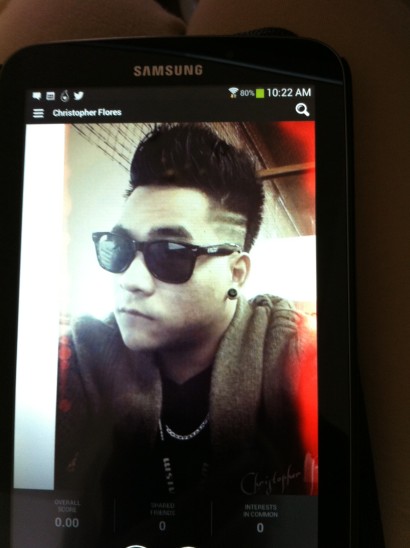 5) If you post a photo that has only a portion of your head showing wayyyyy over in the corner of the photo, with some contraption you think we’ll be impressed by — “X.” 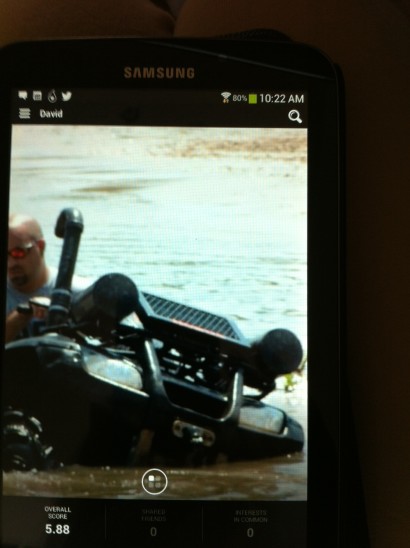 6) Guys, if you have a slew of photos on the app, MAKE SURE THE PHOTOS RESEMBLE WHO YOU ARE NOW. Don’t show me one from your days as a rocker twenty years ago, and one of you in the military in your golden days. People (read: GIRLS) want to see what you look like NOW, not a timeline of your life in photos! I realize because of facebook, my photos displayed do not represent me, but you can delete any photos and upload new ones.

Represent who you really are, because if there is any suspicion to the contrary… it’s an X 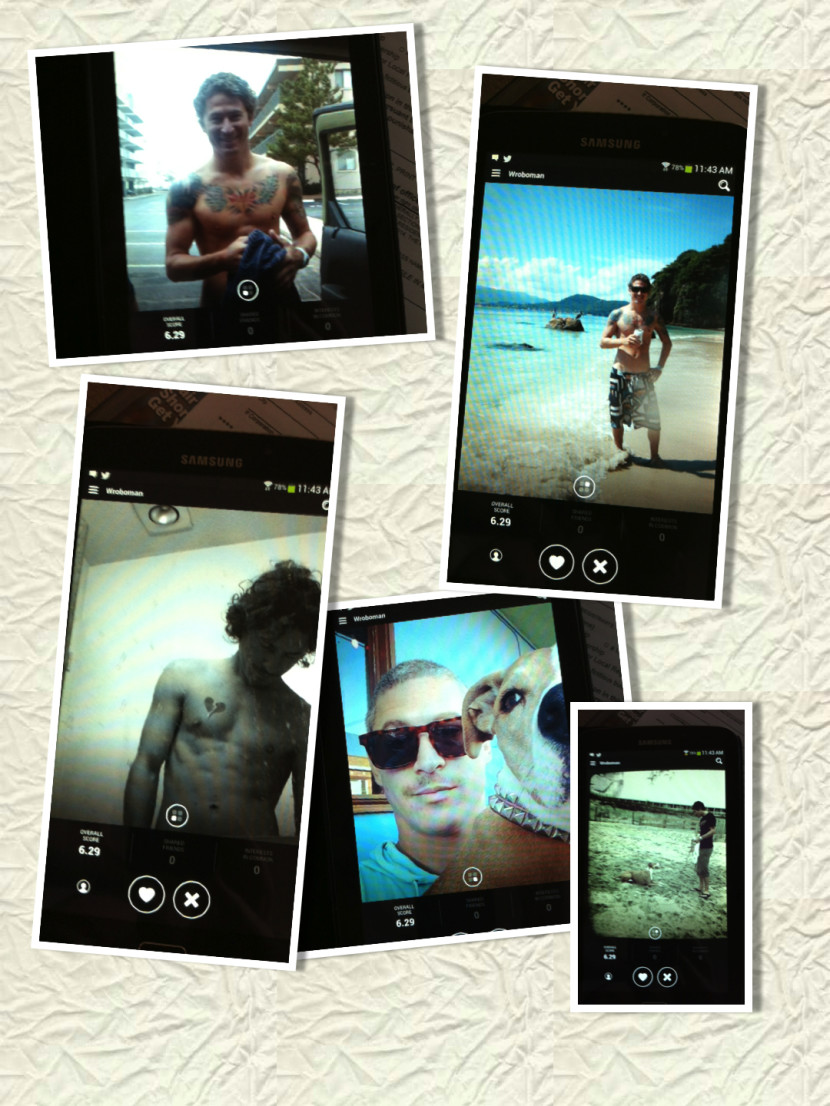 Overall, the app works great. It’s not slow or sluggish, and it’s pretty responsive. I believe it would be a much cooler app and more widely appealing if they added some features (suggested above). In the end, I’ll take my cues from a phrase in app itself “The more you play Hot or Not, the more connections you’ll have.” If you view this as a way to frivolously play the “game” of love, and not a serious way to find your life-partner or to define your worth or clout in the dating arena, I think you’ll enjoy it. It’s a fun and different way to connect with some other potentially fun and different people (in some cases that’s the understatement of the year).

As a fun diversion or game not to be taken too seriously:

* IOS refers to the operating system of iPhones and iPads for you non-geeks, and Android is the system on the Samsung Galaxy or any other number of non-Apple smart phones/tablets.