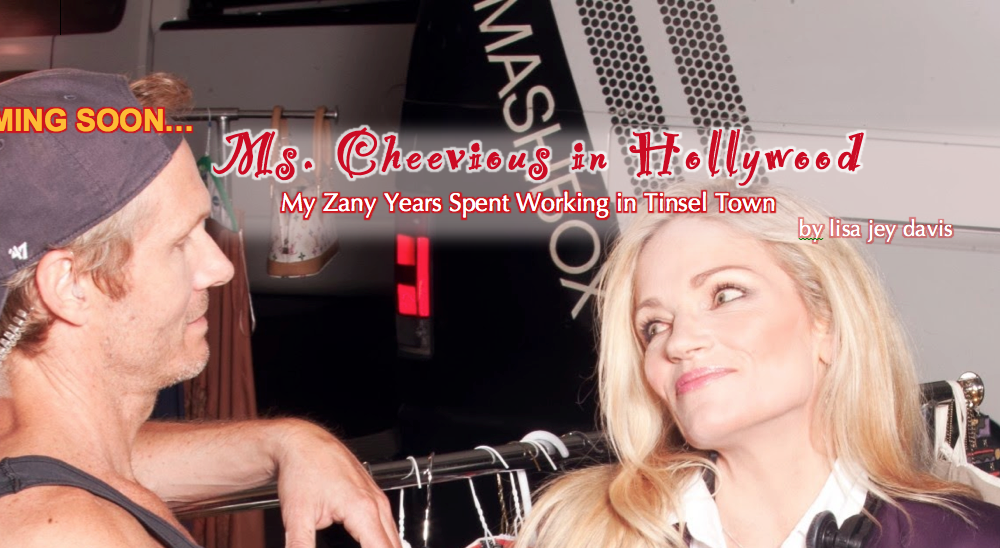 I was talking to my oldest son “Joel” the other day about the one thing every single person alive hates to discuss (if it’s at all uncomfortable), yet not one of us escapes:  THE PAST.

KNOW THIS: If you delve into “the past” with your adult kids, you’re headed for trouble.

The conversation came up because Joel has been a little less than enthusiastic about my upcoming memoir “Ms. Cheevious In Hollywood: My Zany Years Spent Working in Television in Tinsel Town.” This stems from a time a few years ago when one of his friends stayed at my apartment. Though I’ve been living with M.C. Nugget for several years now, I maintain my apartment as an office of sorts.

I swear, if I’d known his friend was going to start leafing through my book’s promotional materials and old book proposals that were on the shelves, I would have set up a candle hexagon around my shelves, done some serious incantations and put a Doberman Pinscher on guard. YOU GUYS! His friend perused my stuff!!! MY STUFF!!!

But once his buddy saw the stuff the damage was done. An old title for the book that I kicked around for a couple of years, and under which I won the award for Best Unpublished Manuscript at New York Book Festival in 2007, was “MILF This! Confessions of a Hot Mamma.” It was also “Adventures of a Hot Mamma” at one point, but you get the gist. I came up with this bright idea because I am a marketing maven, and knew the title would elicit a huge response. Hey, it’s still a great title, but that title was also encouraged by a former editor who read a couple of chapters, saw that I was shocked to hear about MILF’s, and assumed the book was going to be all about my sexual adventures and would only get juicier.

Above are a few sample covers (part of said “stuff” that was rifled through) included in book proposal that went to agents and publishers (they were never intended to be actual covers, because I do not own and did not do the artwork).

Then I wrote the rest of the book.

Suffice it to say a title change was in order.

But that was IT. Joel’s friend jabbed, teased and never let him live it down. I happen to know this friend never bothered to actually READ the material. If he had, the entire room (including said friend) would have deflated when he realized I had nothing scandalous to confess, and no steamy sex stories he could share on My Space.

THAT’S WHY THE BOOK DIDN’T SELL AS NAMED TO PUBLISHERS OR AGENTS. THE STORY DIDN’T MATCH THE TITLE.

It took several conversations before Joel finally understood that MS. CHEEVIOUS (the new book title and, well- ME) was and is not about sex; the book never had been, truly, and it was (and is) more about the emancipation of a single mom who got her sexy back and went after her career dreams after a nasty divorce; Ms. Cheevious is about empowering women (especially single moms) to set goals and make their dreams a reality despite the odds, while learning to let loose and ENJOY EVERY MOMENT (and the celebrity factor didn’t hurt, either)..

After all of that… after the sleepless nights and worry over his mom the floozy, Joel finally came around and said he thought he “got it” now… the whole Ms. Cheevious concept.

Fast forward to present day, and the fact that I am a GREAT mom.

Let’s focus on that for a while, shall we?

I always do what I can to facilitate peace and harmony in my son’s lives.. I can’t control it, and I must be who I am, naturally! But I will do what I can to help them discover peace and true joy if given the opportunity, and if I am able, of course.

So as the day fast approaches that Ms. Cheevious THE BOOK is published, I decided to allow Joel to read those sections of the book pertaining to and involving him. He asked to read them when I mentioned a story from the past that made it into the book. Somewhat freaked out he said, “I’d better see anything in this book that has anything to do with me. This IS non-fiction you know, so it matters.”

He obviously doesn’t read the Ms. Cheevious blog very often to know my reality is peppered with sarcasm and lilted for “the funny” but yeah. Let’s go with that. NON-FICTION. (here’s that to tweet too)

I let him know that my book has a very clear disclaimer stating it is a memoir and not an auto-biography. It states that others’ recollections of the same events will most certainly differ from my own recollections. But no, he still wanted to torture – I mean – reward himself with a first look.

So I sent it over.

That was weeks ago.

Ahhh….this is what moms do, I suppose. But hopefully he’ll be okay when he realizes my real-world story isn’t all about sex (but it really is stranger than fiction).

#MomFactor: Do NOT talk about the past, if you can AT ALL avoid it. AND…. Be careful what you agree to when attempting to be a good mother.