It doesn’t matter what you name it. It’s TEAL. It’s Ovarian Cancer Awareness Month – a very important cause.

Pay attention. Do some good for the cause. 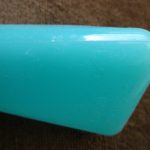