Laurel and Hardy, to be exact. 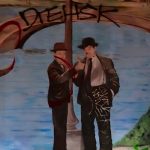 Here, they’re on a graffiti ridden mural in Venice Beach, not far from the soccer-mom tagger‘s mural.