If we learned anything from Elliott Garfield (in the film The Goodbye Girl), it was the importance of not leaving under garments (no matter how sexy) hanging in the bathroom. 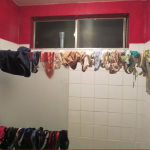