Things I enjoyed this week… ribbons, the government shut down and how to beat the TSA

You know I couldn’t begin my “things I enjoyed” post with something other than this below. The pink ribbon below (for Breast Cancer Awareness) is my own original artwork, and appears on a winter scarf that is elegant, classy and comes in NINE COLORS. I chose charcoal grey.

You now have no excuse not to support a good cause, because all of these proceeds will go to FORCE (Facing our Risk of Cancer Empowered, which supports anyone afflicted by hereditary breast or ovarian cancer) – a very worthy cause. And the scarves are very affordable at $22.95 plus shipping/handling (shipping is more affordable the more you buy of course) – the link is included in the post below, but here it is again: http://www.zazzle.com/ms_cheevious_hereditary_breastcancer_scarf-256814118370194079. Sad to say that the “Sale” below, is over… But it’s still CHEAP:

This makes me wonder what kind of Wheaties this kid is eating.

Yes, a cure for cancer may be on the horizon. I’d love to see it. READ it here. 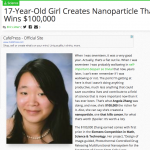 And for more on the young kid scientists kicking ass on the adults:

The headline speaks for itself. This stuff is astounding to me! 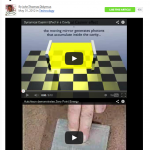 Having fun with the Government Shutdown

I’m sharing this one now to illustrate a point. You guys, how come a couple of kids are so much smarter than our nation’s leaders? It’s extremely depressing.

An event that makes history such as the recent government shutdown, even if that something signifies a gross lack of intelligence, maturity and grasp of reality on the part of our congressional leaders, is something I couldn’t resist poking fun at.

I poked fun alright. BIG. You’ll find it in a post from earlier this week. I really enjoyed writing this, especially given the fact that the fiery arguments around the shut down ridiculously circle around a law people don’t like. It’s weird to me that no one seems to mind that the due process of government has been ignored… and they don’t seem to care what tactics are used as long as they get their way. But it’s okay. Those hundred-thousand or so furloughed workers probably needed a little vacation, right?

Don’t think I am not aware that two of the things to make this list are my own inventions. I know. There there. And if my post on the shut down wasn’t enough for you (above), there was also THIS from Charles P. Pierce at Esquire.com I truly enjoyed as well.

How to Beat the TSA

You had to know this was coming. For a price, you too can jump the line and be the KING (or Queen) of the TSA. Imagine that. It really is all about money. The article on Businessweek.com tells all.

This woman, Dr. Maya Angelou, at 85 is an inspiration on many levels. But she’s proven she can transcend any stigma about age, simply by her media clout. When a company like Cole Haan sees your value and comes calling, you know you’ve arrived, right?  I’m waiting… 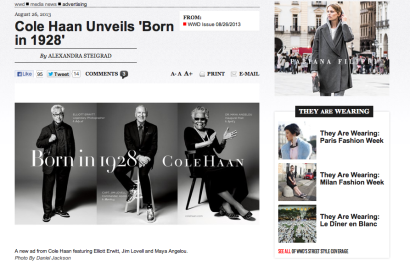 Enjoy these things I enjoyed.  Mmmmppphhhuuuhhh!!!

6 Responses to "Things I enjoyed this week… ribbons, the government shut down and how to beat the TSA"