SEE IF YOU CAN PICK ME OUT

I’m the one tapping my foot. 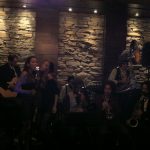 You would be too if you heard The Overstreets New Orleans Jazz Band live and in person.