If you’re in the US, and happen to be jet-setting off to London this week, or you just so happen to be across the pond presently… The hot ticket to have in your hot little hands, is for the Elf the Musical Gala benefitting the Alzheimer’s Society this Thursday evening, November 5.

“Remember, remember the 5th of November?”

If you don’t know the reference, look it up kids, then report back to me. It’s a good one, but it’s the “remembering” thing that kills me!

But seriously, there is a reason this is especially poignant right now: Because November is Alzheimer’s Awareness Month.

The evening starts with red carpet arrivals at the Dominion Theater in London’s West End, and of course the play, which recently opened to rave reviews (produced by Michael Rose and U-Live, and directed by Morgan Young).  Catch the trailer here. Following that, a star-studded red carpet and gala celebration at Hamley’s Toy Store on Regent Street, where I’m told Buddy the Elf (Ben Forster) and Jovie (Kimberly Walsh of Girls Aloud) will arrive on a sleigh pulled by reindeer (police escort and all).

A SLEIGH PULLED BY REINDEER.

WITH A POLICE ESCORT, PEOPLE.

YOU DON’T WANT TO MISS THIS, IF AT ALL HUMANLY POSSIBLE

Because it’s a feel good story that is sure to exceed your expectations, and this evening’s cause is a great one. We’ve got to take care of our elders people. Don’t ever forget that, because as I get older, I may forget it!  I NEED YOU. YOU NEED ME. We all need each other!

It’s that whole “you reap what you sow,” thing.

I know you understand.

If you’re not going to be in London but you have friends or family who might: 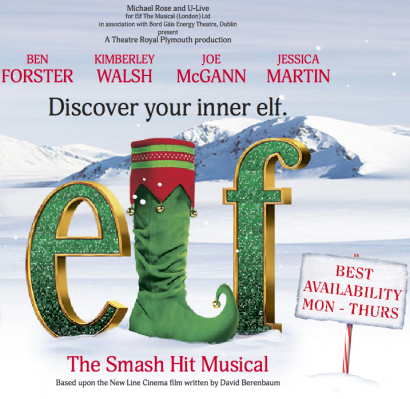