IT SUCKS WHEN YOU WAKE UP

This was part of the set of NCIS: Los Angeles.

A warehouse full of Jameson’s Irish Whiskey is the stuff dreams are made of. But then it sucks when you wake up. 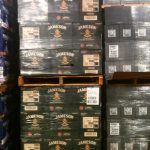