Ever have one of those days when you feel a little discombobulated? That’s what this piece by Joseph Meerbott at the LA Art Show reminded me of. That’s why I was drawn to it, I guess. 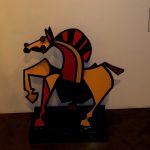 I’ll get right on that.