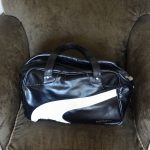 Gotta cross a lot a’ roads.