But you… you can call us *that*

I recently reconnected with one of the first bloggers I ever fell in love with – Random Esquire. Random’s posts were well-written, witty and packed so full of ingenuity I was sick with jealousy. My kinda love.

I’d thought often about Random, who’d left the blogosphere some time ago, and wasn’t sure how to reach out. Then I recently found a twitter handle that seemed to fit, and BINGO, it was my long lost pal. Since then, we’ve been tweeting back and forth reminiscing about the good ole’ days.

This is how happy I am to have Random back in my life:  I told my long lost friend about that time M. C. Nugget and I went to my agent’s barbecue and were forced to come up with a name for what we “are” – a couple, lovers, etc. I ended that post assuming I’d missed the opportunity of a lifetime, by not saying we were “LOVE SLAVES” — “CO-LOVE SLAVES.” I thought I was pretty freakin’ funny there, but then Random tweeted this: 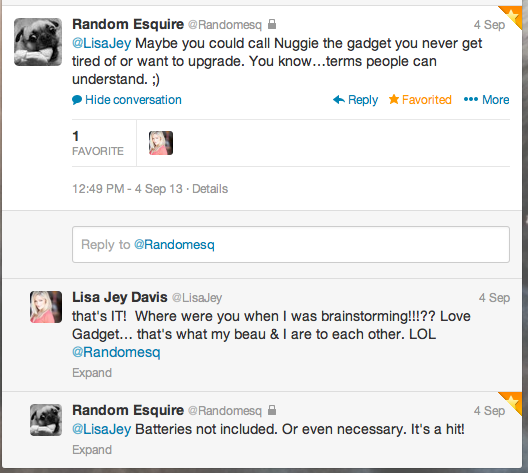 You can call us THAT.