By now most anyone who follows my blog, reads my articles or watches my videos all over cyberspace knows that I have the BRCA2 genetic mutation for Breast and Ovarian Cancer.  As a result of discovering this, I opted back in late 2011 and early 2012 to have all of the lovely procedures necessary to alleviate most of my risk (think Angelina Jolie… No.  I mean it. Picture her, because I’m pretty sure I didn’t pull of the glamorous/beautiful thing during those months. I had the puffy/pale thing DOWN though.). You can read any of the articles I’ve written on the subject by clicking here, here, or here.  You can also see coverage and interviews about said procedures on national television and other places by perusing my personal website with most of those links here. In light of my decision, I’ve written a Dear John letter to my ovaries. For anyone who’s ever had ovaries or known anyone with them (and particularly if anyone has witnessed the effects of Ovarian cancer, or lived through it), you should be able to relate to this.

We’ve been together a long, long time.  You’ve been a significant part of my life – well – forever, and lived with me through everything – the good, the bad and the ugly.  Despite all of that, our relationship has seen its share of ups and downs, to say the least.

Ovaries… I never got over how after our initial thirteen years of peaceful bliss together, things suddenly changed. You got all…  gushy and stuff.  Was it a mid-life crisis?  I guess I’ll never know… but I felt like you became so “high maintenance” then.  And it never let up.  In fact, every single month for about a week or so, like clockwork, something happened and you required unbelievable amounts of extra attention.  Everything became all about “you.”  It was bleeding our relationship dry. From that point on, things between us became – well – strained.

I gained a deeper understanding of our relationship, when I had given birth to my two boys. Somehow, I thought we were destined for better times. I must admit, I made the same mistake that many do, when I thought having the kids would make it all better. On the contrary, the kids needed my attention as well, and I wanted to give everything to them. But your high maintenance shenanigans never let up, and frankly, I didn’t need all the extra effort, energy and work. Sometimes it affected me so much I had to be medicated, ovaries. It wasn’t pretty.

And so, my dear ovaries, you must understand that when I met Brca Gene (Braca for short), I was intrigued. He said everything I needed to hear, and he made things so clear for me. I’d already witnessed my sister’s relationship with her ovaries end horribly. In fact she didn’t make it out alive.  I didn’t want that to happen to us, my love.  So I saw this as an opportunity… a way to set us both free!  Finally you and I both had a chance to be free from the constant neediness… free from the possibility of your getting ill, going insane and turning on me… and free to go on and live our lives… apart (well… that part isn’t probably the best scenario for you, and for that I am sorry).

It hasn’t been an easy decision, ovaries. Honestly, I’ve thought long and hard about this… but after all we’ve been through, and what I now know about you from Braca… well, I’m going to have to say goodbye.  It’s been fun, but now it’s over, ovaries.

Sayonara, Adios, Don’t let the door hit you on the ass – uh – tube…

I’m off to live my life with Braca. Don’t think for a minute that I’m naive about this new relationship. I know it will have its own set of challenges, but I’m going in with my eyes wide open and a hopeful outlook for a long life together. 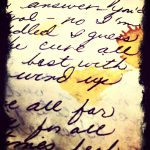 Enjoy your week everyone!

Register to receive these weekly posts via email here  or on the upper right corner of any page on Ms. Cheevious. Be sure to confirm when you receive your verification email!