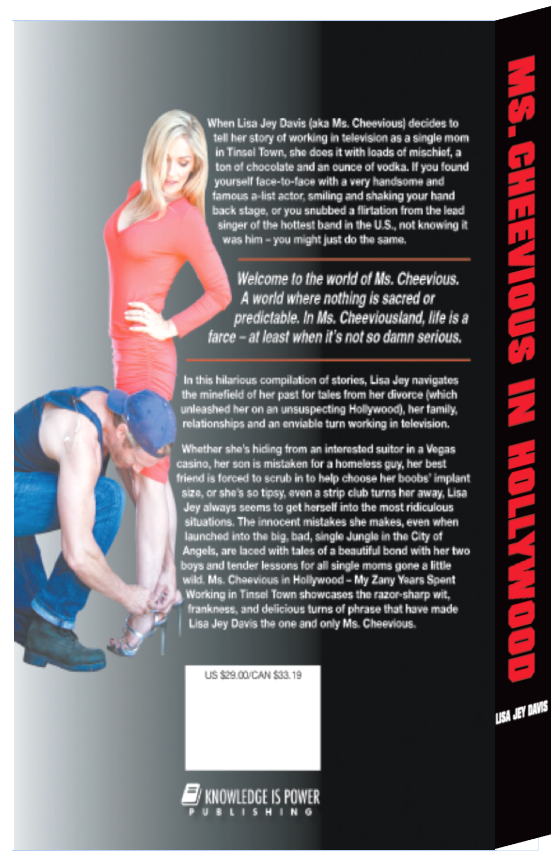 The author page for all countries is here: http://Author.to/lisajeydavis

My author page for various countries is also here: http://Author.to/lisajeydavis

From the back of the book:

When Lisa Jey Davis (aka Ms. Cheevious) decides to tell her story of working in television as a single mom in Tinsel Town, she does it with loads of mischief, a ton of chocolate and an ounce of vodka. If you found yourself face-to-face with a very handsome and famous a-list actor, smiling and shaking your hand back stage, or you snubbed a flirtation from the lead singer of the hottest band in the U.S., not knowing it was him – you might just do the same.

Welcome to the world of Ms. Cheevious. A world where nothing is sacred or predictable. In Ms. Cheeviousland, life is a farce – at least when it’s not so damn serious.

In this hilarious compilation of stories, Lisa Jey navigates the minefield of her past for tales from her divorce (which unleashed her on an unsuspecting Hollywood), her family, relationships and an enviable turn working in television.

Whether she’s hiding from an interested suitor in a Vegas casino, her son is mistaken for a homeless guy, her best friend is forced to scrub in to help choose her boobs’ implant size, or she’s so tipsy, even a strip club turns her away, Lisa Jey always seems to get herself into the most ridiculous situations. The innocent mistakes she makes, even when launched into the big, bad, single Jungle in the City of Angels, are laced with tales of a beautiful bond with her two boys and tender lessons for all single moms gone a little wild. Ms. Cheevious in Hollywood – My Zany Years Spent Working in Tinsel Town showcases the razor-sharp wit, frankness, and delicious turns of phrase that have made Lisa Jey Davis the one and only Ms. Cheevious.

The book, Ms. Cheevious In Hollywood, offers a fabulous, funny peek into what  really goes on behind the scenes in Hollywood… a Hollywood with Lisa Jey Davis (a.k.a. Ms. Cheevious) and her funny “serendipities” in it.

Ms. Cheevious’ positive and empowered response to divorce and the struggles she and her two boys endured is inspiring and a must-read for those who’ve recently experienced any of life’s traumas or not-so-story-book “adventures.”

“Ms. Cheevious in Hollywood” is incredibly funny, and at the same time filled with heartwarming stories of confidence, determination, and the courage to reach for the stars.” — Cady McClain, Emmy-Winning Actress, Artist, Author