LIGHT AS A FEATHER 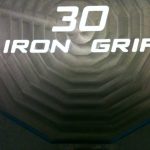 Perfect for a hangover.